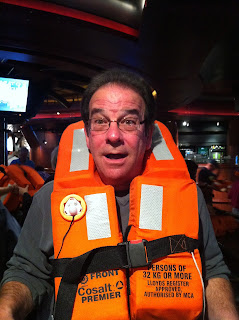 We have been at sea now for 24 hours and have officially dubbed the Sapphire Princess: “The Queen of Rock and Roll”. It’s not because there is cool music all around, it’s because we haven’t stopped rocking and rolling since last night.

Of course ... we would pick the cruise that even the crew has said is the roughest voyage since they started this route.  Barf bags are lined up on every counter in every area of the ship.  Debbie purchased Accustrap, wristbands for motion sickness. She said it really doesn’t work very well … but is so tight that it stops the blood circulation which makes you focus on the pain instead.
This morning we ate breakfast at a great place … Sabatini. The couple next to us was from California and had the same “special suite ” plan we did except that they had the cabin in the forward section of the boat. We thought ours was rough over the propeller … they had waves pounding the walls all night. 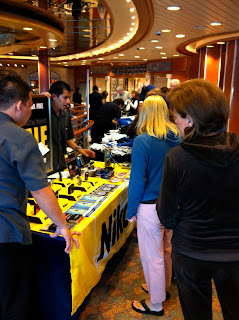 Outside the restaurant, bartering continued … tee shirts, cameras and cruise paraphernalia were the order of the day. Man … this was worse than a New York street corner.
I went back to the cabin to try on my life vest in case I decided to try to make it to land.
Bingo … every cruise has bingo … was being held in the Fusion Nightclub. We decided to try it out. The blackjack dealer from the night before was handing out the cards. She recognized me (she should … she won every hand). Even she sold us more crap … the special bingo marker that inks the spot instead of crossing through it.  The Cruise Director was also the Bingo Master … of course. There must be a Cruise Director College somewhere and they ALL go there. Our guy was stocky with a British accent (probably fake … he looked like he was from Alabama). He started calling out the numbers for the first game: 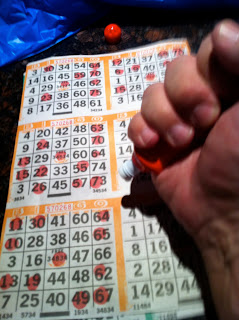 “Okay … the first number is just what the doctor ordered … B12 …. Haha … get it? B12 …. Next … also from the B column B8 … swim with the sharks and you might B8 … that’s Bingo humor ladies and gents …”
Where the hell is my life vest?
No luck in Bingo … so we went back to the Casino where I tried some more blackjack with a Dewar’s chaser and Debbie played roulette with a little vodka until it was time for my massage.
Yes … I had a massage and the girl who did it was about 3’8” tall. I think I saw her in the Wizard of Oz. She was deceptively strong. I think some weightlifter must have slipped in while I was on my belly. Interestingly enough … at the end of the massage she sat me down and told me that I must commit to taking baths with specially designed Princess Cruise line acid eradicating powder for the knots in my back. Ten packets were only $179. 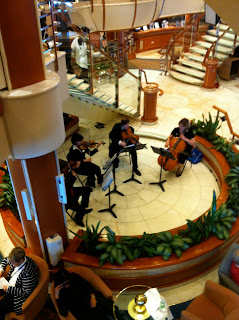 I give up … wait a minute … outside the weather is getting worse and I just passed by a string quartet in the atrium. Did anyone see Leonardo DiCaprio?
at June 06, 2011

OH MY GOD!!! YOU ARE FRIGGIN HYSTERICAL!!!
You poor things!
HOLD ON TIGHT !!

This is too funny, Joel! I expect you will have smooth sailing any day now .. and then all this will just be fodder for your blog :)

But hey, I just noticed Leonardo DiCaprio in the background of that photo. Be sure you get to the bow of the ship first!!

I love it Joel... I took a cruise in 2001 from princess in Mediterranean and the toilet flush was very memorable.
Oh... if you have a bartender named Maria at the back of the boat she makes great spicy Bloody Mary's .

@Denise ... Toilet flush is memorable ... true ... so are the raised floor levels when you try to go to the bathroom in the middle of the night.