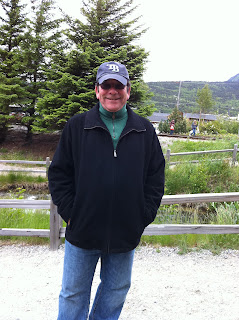 Today we took a step back in time.
During the Gold Rush, over a hundred years ago, Skagway was considered the shortest route to the Klondike ... even though you had to climb dangerous mountains and survive the cruelest elements. In 1898, it was Alaska's largest town with a population of about 20,000. Dance Halls, saloons and gambling houses prospered. Then suddenly in the early 1900's, the gold rush shifted to Nome and Skagway dwindled to 1000.
But it still has the flavor of the gold rush era.
All right ... enough of this Chamber of Commerce commercialization ... I'm not gonna give you a test on this stuff. Skagway is a tiny place with some cool old buildings that takes all of about 3 hours to see.
That's why it was about that long for our shore excursion. 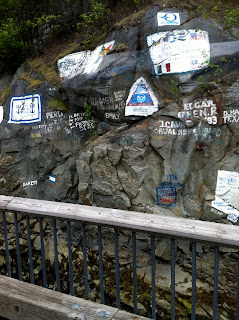 When we got off the ship, we noticed that the rocks along the mountains were hand painted with stuff like The Princess docked here 1974 or John Loves Mary or Klondike Slim loves His Horse.
The place was covered with these. Some were hundreds of feet up ...  looked like there would be no possible way to get there. There was one that had a bunch of obscenities followed by a HOLY CRAP! ... and splashes of paint trailed off down the mountainside.
The real estate here is ... well ... different. I'm sure Debbie can get you into one of these babies for a song. Check it out for yourself: 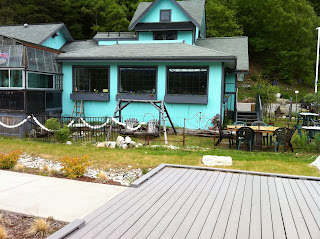 This house is located conveniently next to the Docks. It has a functional outdoor playground and beautifully designed patio furniture." 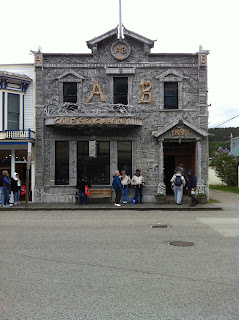 This place is called Camp Skagway No. 1. It's made entirely of large matches. The beauty of this is that ... first of all, no one knows what Camp Skagway is (much less where Number 2 is), there are apparently two parts to this house (A and B) and if you get fed up with it ... it's easy to burn. 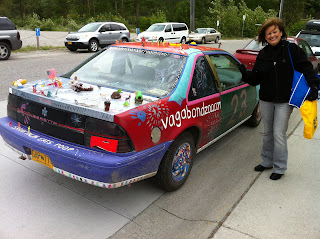 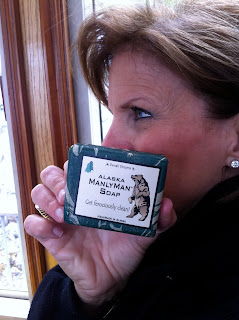 We did a little shopping while we waited for our next Excursion (The White Pass Scenic Railway Tour). There were lots of shops (3 ... I think) so we had a great choice of items. Debbie still couldn't get her shopping done in time. Although she WAS able to find me some soap. 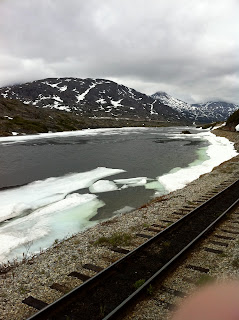 The train ride was three hours long and was ... fantastic. This is the view from the top of the mountain and the end of the line (Alaska/Canadian Border) 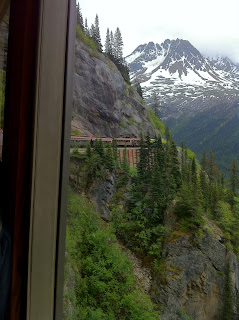 You can see the front of the train turning around the mountain ahead. 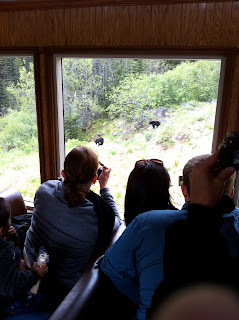 A couple of brown bears were spotted. I got this picture from across the aisle but couldn't get closer. Some obnoxious brat sneezed all over me. 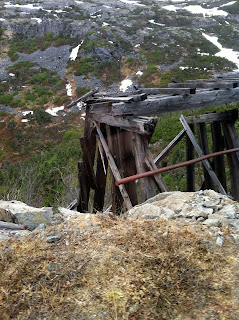 Found a great spot to dump this kid. 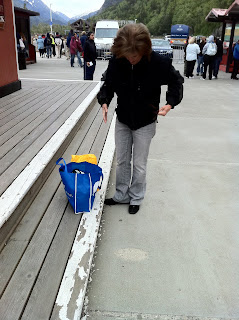 So ... we finally head back to the ship. Debbie has her thirteen bags in tow and it's time to present her cruise card. Security won't let you back on without it. Well ... as luck would have it ... Debbie lost her card. She told me that BECAUSE she put it in her pocket ... it was now gone. Since we had only a few minutes to board, I did what every good husband would do. I told her I would come to get her next season.
Oh wait ... The Coast Guard just caught up with our ship. She's waving something at me ... gotta go .... more tomorrow.
at June 09, 2011