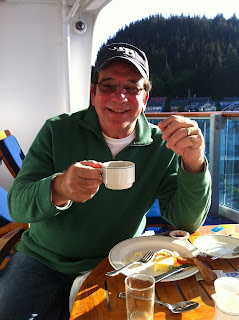 Today was a beautiful day … sunny skies, water like glass, perfect weather for our day in Ketchikan.
What a difference from yesterday. After teetering like a couple of drunken sailors all day with the high winds and nasty seas … we fell asleep and dreamed of Captain Ahab chasing Moby Dick.  Well … at least that was what Debbie dreamed I think because she came at me with a fork at about 3AM.
Just kidding! (It was a knife)
We had breakfast on our balcony overlooking the Wild Alaska Stunt Show (which included a surprise visit from Bigfoot). As tempting as that was … we passed on that one.  We had a full day planned of “Excursions” … as they say in the cruise biz … translation: men and women (with name tags) who cattle prod passengers into busses and tell REALLY corny jokes on the loudspeakers. 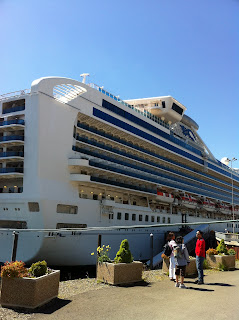 Debbie packed for any possible weather changes. It takes her a few hours but she is really prepared: Coat, hat, gloves, rain gear, a couple of sweaters, plus a few measuring devices to check for hurricanes, tornados and tsunamis. She was really pissed this morning when she called the operator and no one could give her a full day forecast.  It was about 65 Degrees and sunny today. I wore a tee shirt and a sweater.
We were in Group 620A headed by bus (of course) to George Inlet Lodge for a catamaran adventure and crab feast. Our driver/guide was a chatty fella who taught us many “fun facts” using the full serving of guide humor: Did you know that during prohibition, there was a speakeasy in Ketchikan that had a trapdoor to the sea to drop the whiskey through if the cops came (joke: “I guess whether it’s throwing away good liquor or killing the fish it’s still alcohol abuse.”) … or … “We now have an International Airport “ (joke: “ … ever since a Canadian jet landed by accident one day.”) 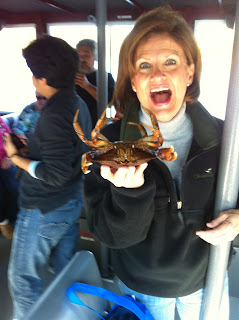 At the Lodge, we transferred to the catamaran and were treated to more fun facts from a sweet young guide who told us all about the Island that surrounded us: “ The most secluded island is without power or water for Alaskans who really want to get away. (I guess that coming to Alaska was not secluded enough).”
We saw some wildlife like seals and eagles … but no whales. Deb was disappointed … that was really what she wanted to see.
Then … as the boat slowed the guide flung open the side door and reached down with a hook for one of the two Dungeness crab traps that she hoisted aboard. Debbie was brave enough to grab one and give a hungry pose to the camera … she actually would have eaten it on the spot if the old man behind her didn’t beat her to it. 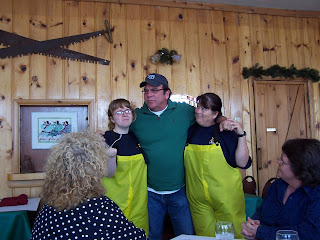 The really cool part of this trip was the crab feast at the Lodge. We were seated in front of one large bowl with a couple of claw crackers for easy entry. There were two Lodge hosts dressed in suspendered yellow waders telling us the rules: We will serve you all the crab you can eat and then you must fill your bowl with the shells. The bowl piled highest  … and they measured them … was the winner and eligible for a special surprise. They too cracked jokes like : “Welcome to Alaska where men are men … and so are women” …. “You know there are 7 men to every woman. The odds are good … but the Goods are Odd.” 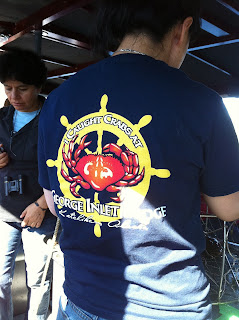 They called me up to help demonstrate the correct way to open a claw and eat the meat. They fed me while they hugged me from either side and then asked me how it was “Sweet!” I said … “Oh yeah?” One of them replied. ”So how was the crab?”
We had our fill of crab and Alaskan beer and finished it off with cheesecake. Yes … I know MORE food on this cruise! It was wonderful.
By the way, we loved the guide's shirt … I bought one at the Lodge on the way back: “I Caught Crabs At George Inlet Lodge”
We drove back to town and headed to our next ticketed event … The Great Alaskan Lumberjack Show. These guys were great … they did stuff like chop up a log while they were standing on it, running up a tree pole then falling off, rolling logs while they beat each other up … you know … stupid stuff like that. But it was fun. 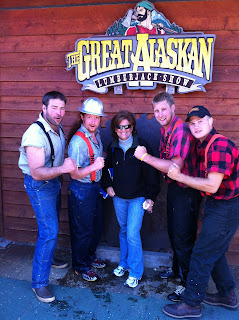 Debbie posed with them after the show. She thought they were hot until she realized they were The Village People … doing their summer shows until the concert season kicked in.
We hung around the downtown after that and met a few folks … 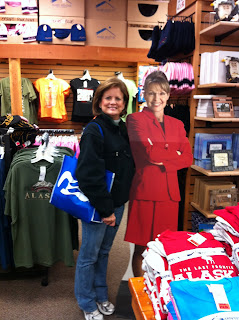 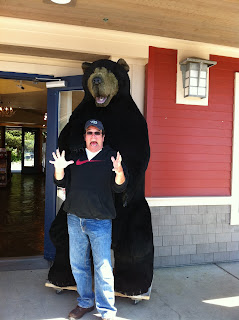 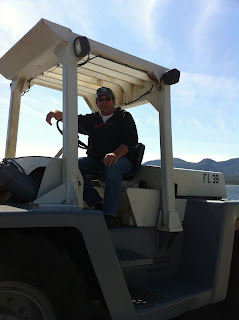 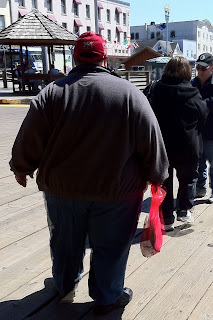 Dungeness Crab-- THAT'S WHAT I'M SAYIN'!!!! (as they say here in OR-E-GONE... whoa guys all you can eat??? Looks like you both are having fun, and the weather seems glorious. Now to find the elusive whales (the H2O-type)omg.... I think Sarah is still on the bus somewhere- maybe St. Pete? LOL.. :) Sharon