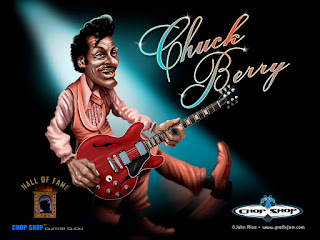 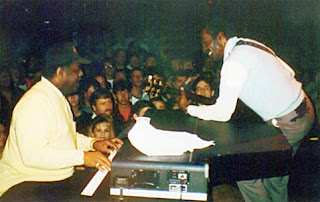 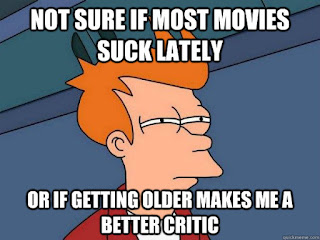 You know, I just have to say it.

The Academy Awards top movies that won this year were yawners. I should be more politically correct, I guess, but I just don't get it. There's the story about a gay black kid abused by his crack head mother who grows into a gay black man drug pusher and has (big surprise) lots of issues. He barely speaks throughout the whole film. Then there's a film about a sullen janitor who watches his children die in a fire and also barely speaks. And then there's a musical about a tortured piano player who barely speaks but sings and dances.

Critics LOVED these films. REALLY?  Two of them were like bad reality TV and I felt no empathy for the characters at all and the third was like watching the movie that I really detested when it came out ... Moulin Rouge. 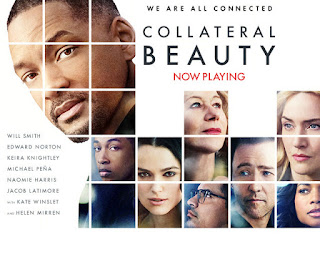 You know the one that critics hated this year?

It's called Collateral Beauty. I saw it at the movie theater and rented it tonight again.

How stupid and classless am I? I think it's one of the best films I ever saw.

Will Smith stars as an ad man who loses his only child to cancer and writes letters to the three abstract elements he blames for her demise: Love, Time and Death. Then he is visited by each in the form of actors hired by his employees.

The rest of the movie is brilliant ... well acted, beautifully written and you will cry your eyes out throughout the whole thing.

Just my opinion, but then again I'm old fashioned. I like movies that ... um ... entertain. 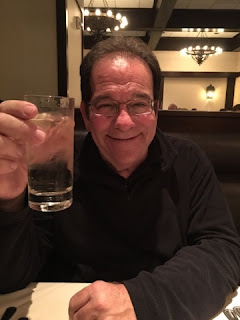 A time for celebration, a little nostalgia, gambling, time away from the office ... or not, bedbugs ... wait I'm getting ahead of myself.

I'll start at the beginning.

Deb and I headed to Vegas for five days. It's the longest vacation we've ever taken there.

Boarded Southwest Monday afternoon for that 5 hour plus flight in those skinny little seats without any food service ... but  who's complaining. Certainly not me!

We were prepared though. 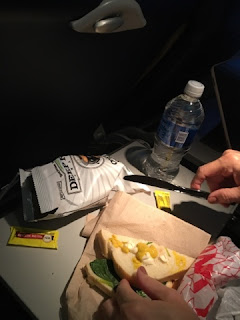 Before we boarded we bought a delicious turkey sandwich from a kiosk with water and chips. We couldn't wait to slap on the mayo and mustard as soon as the seat belt light was switched off. 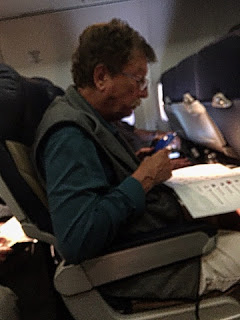 Apparently the guy next to me liked our food as well.

Deb said I squirmed around too much on this flight. Just because I spilled a drink on her and elbowed her in the eye I think I got a bad rap.

All I know is that when we touched down I felt a huge sense of relief. The guy next to me celebrated by dropping his shorts when he stood up to grab his plastic bag from the overhead. 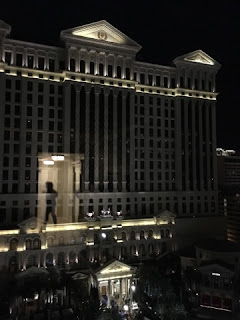 Outside the cab lines were empty! We have never seen it that way. Arriving on a Monday was the right thing to do. No crowds.

I took a picture out of our hotel window and I saw the ghost of Debbie Momberg walking through the building. By the way ... this was our second room. Our first room was situated in an older section of the "Palace" where we stared out at a wall. So we gave it a thumbs down on the Goldilocks scale (Toooo OLD). 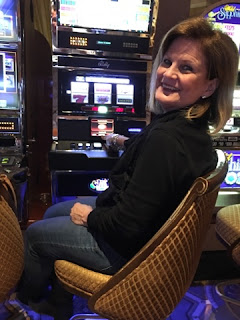 Ghost Deb and I changed clothes and headed to the casino.

She immediately hit $500 on a Wild Party machine, pocketed the dough and said "I'm done. I can live on this for the next five days". And she did. I am amazed by this ... $500 wouldn't last a minute in my sick gambler fingers.

As I crawled from machine to machine and table to table. Debbie settled in to her nice warm bed.

I always overdo it the first night we get to Vegas. I stayed up all night until my eyes fell out and my fingers fell off. Bright and early Debbie sang or just said Happy Birthday ... I don't quite remember. 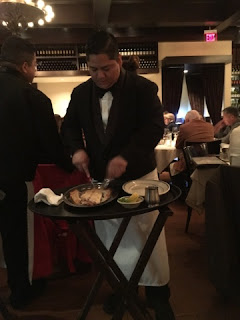 Eventually we went downstairs to the famous buffet ... the biggest and the baddest in Vegas ... and the most expensive. It was definitely wasted on us. I had a few shrimp and a slab of beef and Debbie had bagels and lox in preparation for Ash Wednesday (I guess).

Right after we ate, Debbie left for church to get fingerprinted on her forehead.

I gambled some more (duh).

That night we dined at Joe's Seafood (brother of Joe's Stone  Crab in Miami). It was GREAT! Deb had stone crab and I had the Dover sole prepared at the table ... to die for!

When we got back to the room I was pleasantly surprised by cupcakes delivered to the hotel compliments of my kids. It was a mix of flavors adorned on top with poker chips on  some and dice on the others. I was gonna take a picture but I ate them instead. 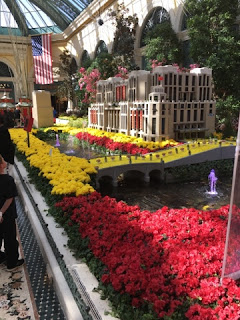 Day 3 we did a little sightseeing. Stopped in the Bellagio to smell the flowers.

We heard there was a shuttle from the Bellagio to the Aria and then to Crystals ... expensive shops. Big surprise. 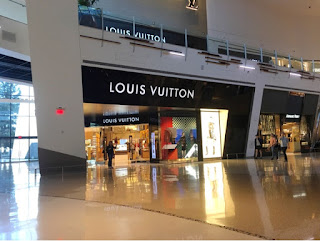 After only 3000 steps ... Deb sighted her favorite store immediately. She visited her purses for a few minutes and then we headed back. 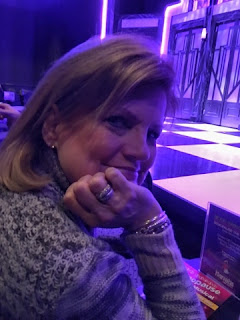 We changed clothes and went to Harrah's to see ... Menopause the Musical that evening.

Front row tickets to a play about four women who meet at a department store and sing 60s and 70s songs about hot flashes and keeping their husbands in line.

I dutifully smiled appropriately (I think).

So we decided to tour the city by monorail. But before we stepped outside Debbie spotted the tiniest problem on the bedspread ... could it be??? Is it a fly, an ant, a flea ??? No ... it looks like a BED BUG!

We took numerous pictures but couldn't get a close up that we could see anything that resembled much beyond a booger. Debbie swore that she was bitten the night before ... so ...

She made the call.

Some guy named Michael told her to pack our bags immediately.

"No ... they want us to change rooms immediately." 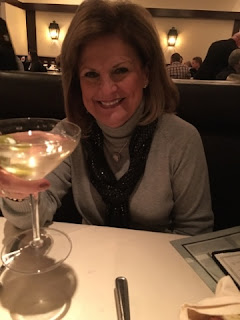 We had no choice ... the last day and the Goldilocks tale was finally coming down to the THIRD room and the third bed which had better be .... JUST RIGHT.

It was .... a few floors below in the same tower with the exact same decor ... it was our final resting spot. "Hmmmm" we thought "Will they give us a big basket of goodies for pointing out the potential bedbug problem? Will it be on the local news? Or will they ban us from Vegas for calling a false alarm on a booger sighting?"

That night we went out to our last dining spot: Gordon Ramsey's. I don't think it was really that good. Surprisingly, isn't he the one who tells other restaurateurs that their places suck?

Oh well ... after a couple of scotches I was feeling no pain. Debbie's very dirty martini had her speaking in tongues too.