FOR THOSE WHO CAN ... SUMMARY

The journey begins with a somber graveside service as the skies above New Orleans burst forth with a hard rain, punctuated by the mystery of an incomplete manuscript delivered to a grieving son by an unexpected guest. From that starting point, author Joel Momberg takes readers on an unforgettable and engaging ride in his third novel, For Those Who Can – following the path through the mid-1970s of a young college prep teacher, Alan Handler, in an adventure filled with laughs, love, and a lingering sense that something is amiss.

Traveling the country for an education services company, Alan learns he has a knack for connecting with the widely diverse groups of students he encounters along the way. Yet he cannot quite understand the beautiful blond-haired woman from Mississippi – fellow teacher Karol Rae Ballard – who captivates him from the moment he lays eyes on her.

Their romance propels them through various stops at high schools in the South and Midwest, as Alan finds himself irresistibly drawn to the strong and stunning Karol Rae. At the same time, he grows increasingly aware of something she seems to be running from – setting in motion a narrative that eventually weaves its way to Europe and back to the States, and in a handful of emotion-packed revelations that ensue.

On another level, For Those Who Can is a lively period piece that unfolds to the soundtrack of the ’70s – Randy Newman, James Taylor, John Denver, and even satiric Texas troubadour Kinky Friedman. It takes humorous detours to a surprise, wrongful drug arrest and surreal trip to Indiana’s state prison. And it winds its way to the cold-hearted killing of a private school headmaster that causes Alan to question whether he should go forward as a teacher.

But then comes a phone call that will change everything, pulling Alan and the novel’s storyline in a new direction – all the while with Karol Rae keeping her hold on his heart. The book’s title is drawn from the phrase, “Those who can, do; those who can’t, teach.” As you will come to discover, Alan Handler can both teach and do in his life. The proof lives in the pages of that unfinished manuscript passed along at the gravesite – and in the trademark Momberg twist of the gripping finale. 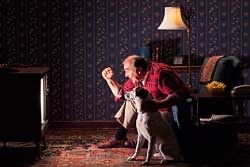 I have to temper my TV watching. My blood pressure has been off the charts lately when I watch the news with Debbie.

I find myself screaming at the TV set.

Debbie will calmly say, "It's going to be okay. We have made it before."

"YEAH? Not with a pandemic, riots around the country, people getting shot ..."

"I don't know why you get yourself so worked up lately."

"Because we are not going to have a country soon if things don't change."

"Go and get yourself something to drink and relax."

I head to the kitchen and feel better just not looking at TV, when all of a sudden I hear Debbie screaming at the set.