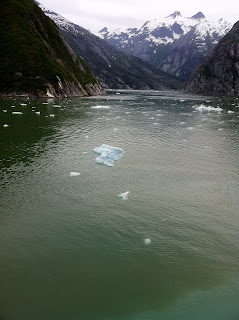 This morning … at about 6AM, we passed through the fiords at Tracy Arm.  We were told to wake up early to see it. Well, honestly, I wasn’t sure what that sight would look like … since I didn’t know what a fiord was and Tracy Arm sounded like a fleabag hotel.

It was spectacular.
Tracy Arm sported a narrow fiord (body of water between steep mountains), glacially polished rock and hanging waterfalls. The water depth is 1000 feet. How the heck the ship manages to navigate through the floating icebergs (only one tenth of which is visible above the waterline) is a mystery to me.
I managed to drag myself out of the room to get some pictures. I was extremely tired after a strenuous night of lifting plastic chips, pushing buttons and watching for opportunities to double down, take a hit or tell the lady next to me why she shouldn’t split kings. I was a finalist in the blackjack tournament … came in second … which is to say … I lost. My consolation prize was a hat and tee shirt with Player’s Club on them. 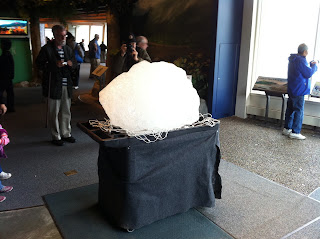 Okay … enough about the casino … today was the day we explored the world’s largest glacier, Mendenhall, and continued our hunt for the humpback whale. We reached Juneau and boarded the bus at about 2PM. The guy in front of us kept futzing with the AC switch for some reason even though the driver said the system was broken. This was the same guy that had an argument with his wife at dinner last night: “… I TOLD you what wines go with what entrees. Don’t embarrass me any more. Go with the Pee-knot Ny-oar tonight.” 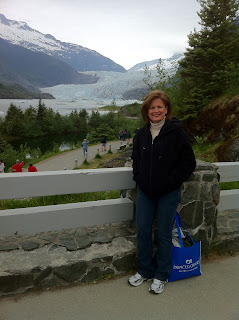 We stopped at the Mendenhall Visitors Center and learned all about this incredible glacier. It has been shrinking for 400 years and now it fits on a table at the entrance to the Center. I took a picture of it. Ironically there was one outside that was much bigger and might have been there first.
Debbie posed for a picture in front of the big one.
We got back on the bus after an hour or so of checking out the glacier and headed to the catamaran that would take us to look for wildlife. It took just a few minutes and there it was … The whale … the humpback whale … and killer whales … Everywhere. We grabbed our cameras to take some shots.

I gotta tell you. I don’t know who gets these pictures of the whales  leaping in the air (when they aren’t captive at Sea World) but my shots didn’t look anything like that. 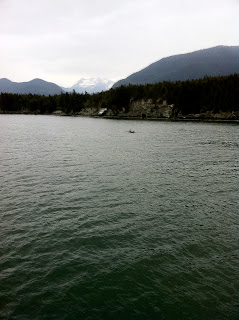 Mine are little specks in the ocean … mostly blurry… and if I didn’t tell you what they were you would never know.