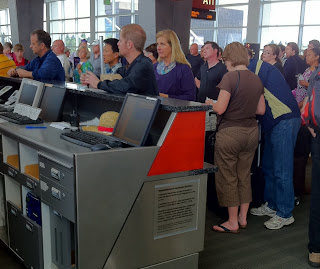 Here's what the cruise brochure says:
"Debarkation: For our suite passengers, relax in the Wheelhouse Lounge on Deck Seven until we escort you to your luggage. You have priority Debarkation privileges as one of our special VIPs".
I admit ... We picked the snooty VIP status because we didn't want to wait in those Godawful lines and miss our airline connection. Also ... Because we are snooty.
Apparently, we read the wrong brochure or THEY LIED. Here's what really happened:
At 7AM we went to the Wheelhouse Lounge and had a muffin and apple juice and waited with the rest of the passengers until ... 9 o'clock ... when we could finally get off the freaking boat ... unescorted ... Behind the senior citizens brigade with walkers and canes (I know, I know), the Vienna Boy Choir and the entire cast of Glee.
Meanwhile ... Debbie was checking our flight status (remember we fly standby which means we also wait behind the aforementioned group and enyone with real money), and was also in communication with the airport driver who was waiting at the pick up point for about an hour and a half.
We get to the place that our baggage is dropped off  behind yellow barricades. Our bags were about ten feet away but we couldn't touch them. We waved down the head baggage handler. We knew he was the head handler because he had an orange vest instead of a yellow one, he wore a brimmed hat (thought he was Harrison Ford) and didn't lift a finger.
"Excuse me ..." Debbie said in her non angelic voice.
"Howdy. Where are you folks from?" He asked.
"St. Petersburg."
He looked confused.
"Tampa Bay." Debbie prompted.
"Oh yeah. Well you folks had a nice trip."
"Yes ... Until now" Here it comes ... "When can we get our bags ... I can see them from here."
"Well ma'am, you see we have a process like the airport ..."
"Speaking of the airport ... We are going to miss our flight ... We had priority baggage right here ..."
"Ahhh ... Well I'll see what I can do."
He disappeared out the back door to the Temple of Doom.
The barricades came down a little while later and Harrison reappeared in enough time to say ... "I hope you catch your flight!"
Debbie zoomed ahead and I lost her somewhere between baggage and customs. I pulled  to the side to find a chair to look above the crowd when she spotted me and "sternly" told me to keep up.
I did as I was told.
We found the driver who got us to the airport in time for our flight. The Delta agent at the information desk checked our standby status:
"Looks like there are 58 seats and there are only 11 standbys .. You're in good shape."
Debbie closed her laptop, satisfied that she didn't have to look at those routing options we usually have to try .. Through Minneapolis ... To Salt Lake via Orlando and Sarasota arriving next Thursday.
Suddenly Delta lady said ... "Hmmm."
Uh oh.
"They downgraded the airplane but had an increase in available seats."
Debbie replied, "When I checked my laptop, there were only two seats available."
"Not now apparently." Delta lady said. "Let's check you in."
Now most people would find that strange. I used to. I am no longer surprised by Delta's computer system. No two ever have the same information.
"Your suitcase is over the limit ma'am." Delta lady said. " That will cost you $90. What do you have in there ... books?"
"I have another bag in there ... I'll just repack okay?"
That's what she did ... Right the in the middle of this lady's check in line ... Flashbacks of  Day One: Seattle.  However, since Debbie is a suitcase packing professional it was not a major problem. She repacked in under 2 minutes.
FINALLY we got to our gate ... Settled in ... and ... you guessed it ... we didn't get on! Why not? Because there was a (drum roll please) mistake in the computer system. Yep. They had downgraded the equipment and had REDUCED the number of seats by 58.
What happened next?
I'll tell you when I find out. We are still in Seattle checking optional routes. Debbie tried to route us through Seoul, Korea but there was only one seat left.
Our bags are in Tampa ... If you see them ... Tell them we said hello.
UPDATE:
Just heard a loudspeaker announcement: "Passengers Momberg ... Please come to the desk" ...  There IS a God!
at June 12, 2011

Does one laugh or cry? Maybe the cruise ship has some deal with the city of Seattle and the airport!! OMG.. I hope you guys got a flight. If not maybe a room in Seattle. No U2 concert tonight. Look at it this way-- you can totally fit into the "grunge scene"!!!!!!! Who needs a change of clothes? Don't ya just love the NW? All you need is a Mariners sweatshirt, birkenstocks and you are set to go--- Sharon

@Sharon ... Well ... Laughing and crying didn't help but maybe a little whining did. We are in the air! Love Seattle!