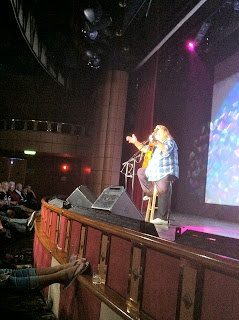 Gotta tell ya ... last night was a pleasant surprise.

We saw a show featuring a guy named Steve Moris. He was actually very talented. No schmaltzy "cruise music" ... this guy was the real deal. Apparently, he's played with every band known to mankind from Beach Boys and Jan and Dean to Clint Black and Tanya Tucker. He's got a slide show with all of them grinning and hugging. (Of course ... he could just be good with photo shop or goes to a lot of concerts.)

On stage it was just Steve and an acoustic guitar. We got a preview of his talent the night before when we got a glimpse of his comedy routine. His guitar styles are varied. He did a great rendition of Mason Williams' Classical Gas and ended with Neil Diamond's Sweet Caroline with heavy reverb and dangling consonants.

He's going to have a steady gig at the Palace Station in Vegas come October. Check him out.

We found the best on board restaurant last night as well ... Santa Fe. I got kicked out, however, because it was formal night so everyone (except for me) was dressed up. Debbie made me go back to the room to change out of my jeans. 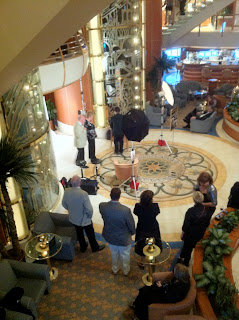 But ... I DID change my pants to eat at this restaurant and it was well worth it. Prawns the size of your fist and lobster tails that were perfectly cooked.

This morning, I had some time to think about what I've learned on this trip about cruise vacations and I hope you indulge me for a few minutes while I impart this useless information to you:

Fun Fact 1: There are NO Love Boats in existence. The crew of the Love Boat not only doesn't exist, it never was close to any representation of what the crew of any ship looks like.


Gopher, Doc, Isaac, the captain and Cruise Director Julie Mc Coy were all Americans and apparently ran the entire ship. I don't remember any other cruise members. They also had romantic adventures every week, interpersonal relationships with passengers and no technical skills whatsoever.


I don't remember seeing any cabin steward making animal sculptures out of washcloths and sunglasses. 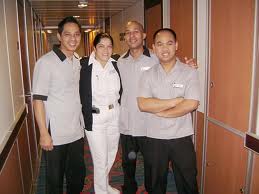 Most (I take that back ... ALL) of the ships that sail today have a melting pot of crew members. There are Romanians, Russians, Hispanics, Chinese, Japanese (and other ... ese's), Jamaican, Irish, British, etc. What I discovered though ... is that there are only one of each. That's right ... I think that's how the cruise lines save money.

There's a Romanian black jack dealer who also sells jewelry on Deck 7 and runs the bingo game on Deck 5. I think she served me dinner last night as well.

Fun Fact 2: Speaking of gambling, my new friend Ricky from Alabama told me how the casinos make money. "They ain't got reg-a-lations on these here ships. That's right, the slots are tighter than an (animal's extremity). First day or so ... they pay off to sucker you in ... then they gotcha for the rest of the trip." I had actually heard that before. "The other thing I noticed ... you see that Russian dealer? Well when the table's hot ... they send her in. Deals fast as lightnin' and doesn't let you think about your bets." Ricky's right.

Fun Fact 3: The male dancers in the shows are gay. (I'm pretty sure about this.) 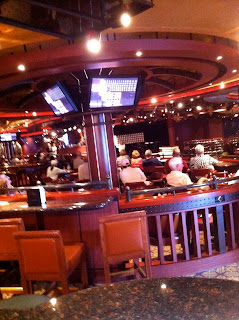 Fun Fact 4: There are cults of bingo fanatics who cruise just for that reason. Well ... maybe that is a slight  exaggeration. They cruise for trivia contests and dollar bill folding demonstrations as well.

Fun Fact 5: Aft cabins are the only way to go.


Oh man ... look at the time. I have to take a nap and then get ready for lunch or dinner or snack or some other meal. This cruise business takes a lot out of you.