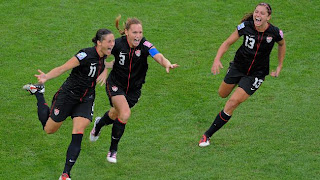 
She's a 36 year old mother of two -- the captain (and only mother) on the U.S. women's soccer team -- whose daughter Rylie lost her first tooth the other day.

She's the middle player in the photo at right and a lockdown central defender who has been terrific in her fourth Women's World Cup. She's a remarkably fit player who, despite being the team's oldest member, has the No. 1-rated fitness level on the 21-player squad (based on the eight tests everyone has to complete).


And ... she's doing all this despite having Lyme disease.


A sometimes debilitating infectious disease spread by ticks, Lyme disease can cause fatigue, headaches and fevers. Rampone noticed that she was exhausted last year, and finally in December she took action.


Rampone has been on medication, she says that she "... has good and bad days, but when it's tough I just push through it,"


Think about that when you watch Rampone in action tomorrow for the championship against Japan. 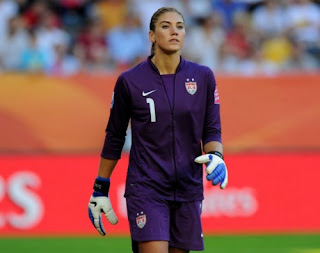 Hope Solo
In addition to setting a goal of being the No. 1 goalkeeper in the world, Hope Solo now has added incentive to play her best: to honor her father, Jeffrey, who died of heart failure June 15 at 69.
Although her parents divorced when she was 6 and her father, a veteran, lived for a time on the streets of Seattle or in the woods outside the city, Solo and her father had a strong, unbreakable bond.
They were kindred spirits. They shared a deep love of sports – when she started playing organized soccer at 5, he was her first coach. They stayed close through the years, through weekly letters to Solo and her brother, Marcus. When Solo moved to Seattle for college, she and her father physically re-established their relationship.
“He’d call me from a pay phone, and we’d pick a place to meet. And I’d make him macaroni and cheese, and we’d sit in the woods in a tent and talk for hours,” she says. “He understood life and sports, and that’s why he knew me so well.”
Solo refuses to describe her father as “homeless.”
“He was a tough Italian guy who was raised in a boys home in the Bronx,” she says. “He always had that street sense in him. In terms of being ‘homeless,’ I’m always very careful not to define it that way. He chose to live in the woods. He enjoyed it. I’d offer him money, and he’d never take a dime. If I looked for him, I wouldn’t look for him at a homeless shelter.”
Six years ago, with Solo’s encouragement, he worked through volunteers at the Department of Veterans Affairs to move into a retirement home. Although he attended all of his daughter’s games at Washington, arriving four hours early to watch her warm up, he’d never seen her play for the U.S. women’s team. He’d looked forward to being at the Brazil game June 23 in East Rutherford, N.J., and giving Solo a tour of the Bronx. He died eight days before he could follow through with those plans.
“He was so excited to go back to his hometown, to see me in my USA jersey, to show me where he grew up,” she says. “Instead, my mom, my brother and I took the trip to honor him. And we took some of my father (his ashes) with us. We took him to Yankee Stadium. My dad was the world’s only Yankee and Red Sox fan.”
She spreads his ashes in front of every goal she now defends.
at July 16, 2011