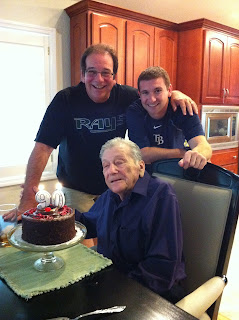 To celebrate, we invited him to the house ... and three generations of Mumboigs watched the Rays defeat the Royals.

I picked him up at the "Manor" at 12:30. He was singing Happy Birthday to himself in the lobby with an audience. His walker had seen better days ... scratched and bent where Sammy had bumped into furniture, walls and other residents. Actually he ran over two of them on the way out.

His disconnected conversation started as soon as he buckled in the car.

"You know ... most of the people I know from New Orleans are dead ... Just Bert Stolier and I are still here ... I was just sitting in my room with nothing on ... just thinking about that."

"You said you had nothing on."

We kept the rest of the car conversation brief. It took me a while to try to erase the visual from my mind.

Once we got to the house, he plopped himself down in his favorite comfortable chair as Debbie asked him if he'd like some lunch.

"Anything would be fine."

Debbie asked, "Would you like a chicken salad sandwich ... on wheat bread?"

"How about rye bread?"