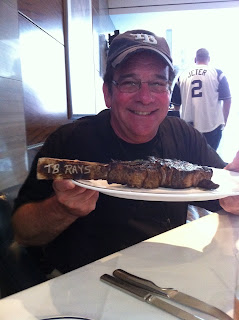 Today was amazing.
I'll actually start from the end of the day and work forward. We ate at the NYY Steakhouse. It's right there at the ball field (Yankee Stadium). Dinner was really the last thing we did today as part of our great NY vs TB USF Athletic Auction package that we bid on a couple of months ago.
The Rib Eye in my hands was their specialty and as you can see ... they carved TB Rays in the bone ... just for us. I carved the rest right into my mouth.
What a meal!
It's part of The Hard Rock but owned by the Yankees ... didn't quite understand ... but since I didn't find any poker tables or slots ... I figured the Indians must have pulled a fast one on old George. 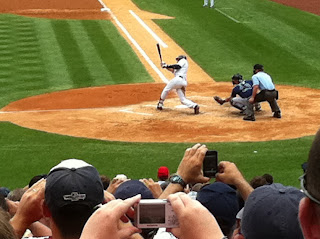 Jeter hit #3000.
The crowd went wild of course ... as well they should. It was a home run (the only other time a player ever hit a home run on his 3000th hit was our very own Wade Boggs when he was playing for Tampa Bay).
Jeter went on to get 5 hits this afternoon ... another tied record ... and the Yanks beat us 5-4.
Not the score you want if you are a Rays fan ... but a helluva game! 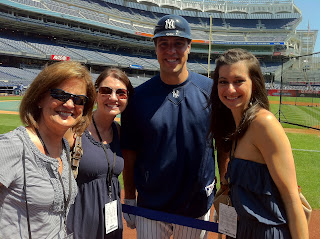 Right before the game began, we showed up for batting practice.
Debbie and I, daughter Alissa and one of her best friends who lives in NY, Laura (Sibley) Perkins stood in front of the dugout and collected autographs and pictures.
The little guy in the middle is Mark Teixiera, Yankee First Baseman.
He and Joe Girardi and Ramiro Pena and a few others came by as well. I tried to distract them by throwing baseballs at them and calling them names ... apparently it didn't work out that well for us. By the way, they are truly nice guys.
>>>>>>>>>>>>>>>>>>>>>>>>>>>>>>>>>>>>>>>>>>>>>>>>>>>>>>>>>>>> 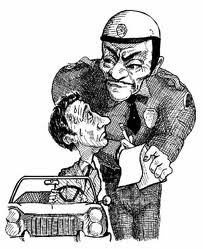 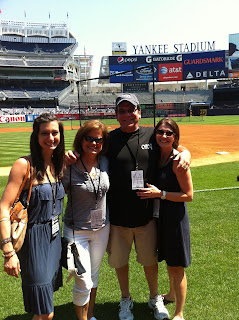