Day 3: More Jersey and Some Manhattan 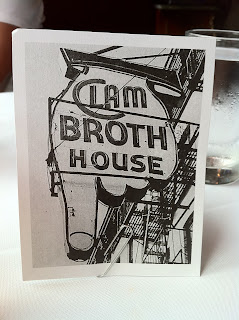 Got so caught up with the Cake Boss I forgot to tell you ... We had a great lunch in Hoboken yesterday. It was a place called the Clam Broth House.

I posted a picture of the back of the check ... dates back to the 1800. By the way, if my brother-in-law Tom is reading this I want you to know ... IT IS A FINGER HANGING DOWN.

I know this is Jersey ... but dere are limits, you know what I mean?

Throughout lunch we were treated to the sounds of the town's best known celebrity ... Frankie Sinatra. 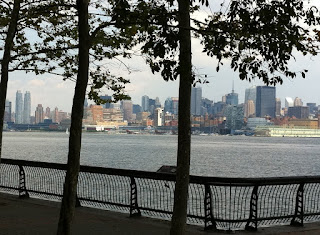 Outside the restaurant there is a great shot of Manhattan across the water. I shot this just as a bum passed in front of me after he rifled the garbage can. 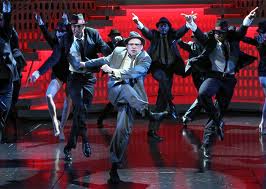 Last night we saw a great play: Catch Me If You Can. It was based on the movie by the same name.

It follows the exploits of a real guy, Frank Abagnale, who was a check counterfeiter ... turned pilot ... turned doctor ... turned attorney ... all when he was still only a teenager.

The cop is Carl Hanratty and is played by an actor named Norbert Leo Butz. He won a Tony for Best Actor (and Best Dancer). His name alone should win a Tony.

The guy is great. He stole the show. He's funny as hell and he can carry a tune. He also looks like Steve Klasko (sorry Steve ... had to get that in). The rest of the cast was fantastic too. 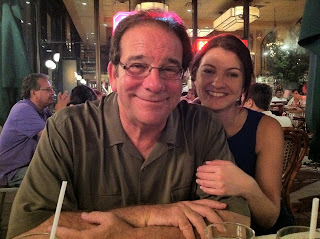 After the play, we went to a little restaurant on 7th, Maison's.

Alissa is always happy when she sees me (and gets a free meal).

Today ... it's off to visit a cool nightclub/ping pong/restaurant called SPiN. It's the brainchild of Susan Sarandon and her brother Terry Tomalin (St. Pete Times Outdoor Editor). The one here was the original ... there will be one in St. Pete opening soon. Terry wanted us to check it out.