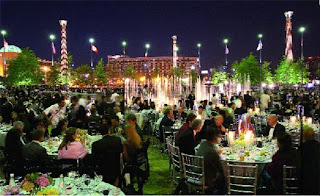 Debbie and I got to the dinner a little late but there was a beautiful table ready for us. The place was filled with men in tuxedos and women in long dresses dining in elegance ... even the servers were dressed to the nines and everybody addressed us by name. The food was spectacular and plentiful. We ate enough lobster and steak to feed an army.

At the end of dinner, the emcee asked us to come up on stage. He introduced us to the crowd and everyone stood and applauded wildly. We looked at each other ... embarrassed with the outpouring. I spoke to the crowd ... and every word I said was met with more applause. It was as if I could do no wrong.

There was a beautiful Steinway grand piano sitting to our right (once owned by Elton John ... how I knew this is anyone's guess). Our emcee invited me to play.  At first, I politely declined ... but the crowd would not hear of it. So I reluctantly sat behind the keys and played "As Time Goes By". It was a fairly simple version but always a crowd pleaser. THIS CROWD absolutely loved it ... a standing ovation. They hollered for more ... I was stunned ... I played everything I could think of from dixieland to rhythm and blues ... standards and doo wop.

Then the lights dimmed and a beautiful young lady came out on stage. There was music coming through the sound system that trumpeted an incredible Academy Awards type of intro. The young lady handed an envelope to the emcee.

Emcee .... "Mr. and Mrs. Momberg, would you join me center stage?"
Debbie and I stepped up to the center.
Emcee .... "It is my great honor and privilege to present you with this token of our gratitude for doing such a wonderful thing for us tonight and for all that you have done in the past for us."
Me ... "Um ... We're sincerely touched by your generosity but I'm not sure what we did to deserve ..."
Emcee ... "Oh you are both too humble ... please ... open the envelope."
I held the envelope in my hand and saw the writing on the front. It clearly had seven zeroes ... $10,000,000 ... payable to ... ME. I ripped at the envelope but couldn't get it opened. Debbie tried too ... we struggled and struggled ... until ....

that is awesome! Next up...dreaming of your own show at HR ;) You are awesome and I would LOVE to see this dream come true you deserve it. Thanks for making me smile with your writing as usual! Love to read if we can't chat. Keep it up!

@Morgan ... Thanks honey. This is much more realistic for you (star of stage and screen). Miss you. Your babies are beautiful btw (best to the fam).

Darn it, I know what you mean. I am waiting for a letter in the mail saying that I am the long lost daughter of Bill Gates and he found me and I am going to live with him and Melinda. YUP. But I don't like Billy, so there.