Got an email today from my buddy, Rod Challenger.

He set a date for our annual baseball ticket drawing for the 2010 Rays season. We share season tickets with about 5-8 couples (depending who is in from year to year). Debbie and I have two tickets for 20 games and have had them from the first season ... when they were known as the Devil Rays.

We've never made it to his house for the drawing ... ever.

Each year I send Rod a note apologizing for not making it to the drawing and each year he picks our tickets for us ... it's a tradition. 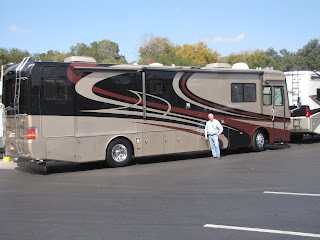 This year his response had a different twist: " I am so surprised (that you're not coming). Hey, by the way, we bought a motorhome and plan to tour the country ... will miss most of the season ..."

Rod retired from broadcasting last year ... he was a newscaster for 78 years or so (maybe 79) and weathered a couple of heart attacks, lightning strikes (he was struck by lightning some years back during a newscast and carried the nickname "Lightning Rod"), and has sported a variety of hair colors that are created in his bathroom by his wife Kathy.

He travels around the world in search of the perfect oceans to dive and take beautiful photographs of the marine life.

On his last trip ... he rented a motorhome. He had a ball ... apparently didn't kill anyone ... and NOW decided to buy one himself.

I can't believe I'm saying this but ... I'm not sure I can go through a whole season without Rod next to me. He always brings a glove with him (as if he's going to really catch a ball), screams at Joe Maddon constantly and insults most of the people around us.

But you gotta love him.

One game ... he got so excited trying to catch one of the wiffle balls that the cheerleaders threw in his direction that he knocked over two kids and a "large" woman with a beer. Took em all out!

He never did catch the ball.

I know what you mean with season tickets. It is just not the same when the entire crew is not there, especially the rowdy ones!