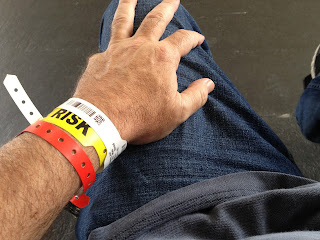 Just when I thought it was all behind me ... I came back to the hospital for surgery number 3 (in 30 days).

All the cliches came to mind:
- Three strikes, you're out
- Bad things come in threes
- Three sheets to the wind

But I chose to look to the only positive one that came to mind ... "Three times is the charm". (Note to daughter Alissa ... I also thought of our favorite SNL Eddie Murphy routine "Unce, Tice, Fee times a lady" But it didn't fit this).

So here's what happened.

Wednesday night, I noticed that the surgical scar on my belly that held the shunt catheter had blown up overnight and looked like a small mountain range. Dr.V got our call and was out of the area. He told us to go to the ER right away and he would follow up in the morning.

Got there at 9PM. The Neuro Resident checked me out and ordered a CT scan. We were sent to the ER hallway where I sat on a stretcher and Debbie got a chair. We met some interesting people ... one of them was a guy in handcuffs who somehow leaned out the door in triage and yelled HELP. He disappeared back into the room with police and others and we didn't see him again. 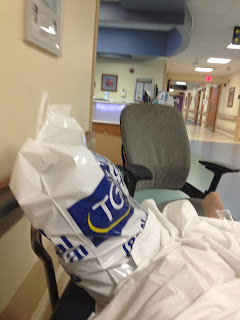 At 11 PM they came to get me for the scan. I laid in the hallway for about an hour as one tech after another passed me by ... I tried to flag them down (like getting a taxi) They ignored it. Midnight, got the scan.

The docs came to talk to us about the scan and said that the shunt catheter that was placed in my abdomen had dislodged and was sitting in the skin of my stomach where the fluid was now collecting ... so surgery was called for. They called for a room. It was full but they promised to get one right away. That was at one AM.

At about 3AM I told Debbie to go home and get some sleep and get something to eat because it wasn't looking good for a room too soon. She wasn't gonna leave. I had a conversation with the charge nurse about us just going home and coming back the next day. Not a good idea at this point .. trying to readmit after being in the system and then discharged. Might as well hang in there.

At 5 AM I texted Dr. V who was on his way and trying to work things out on the surgery schedule for my procedure. He got there at 7AM and we were still in the ER just finalizing the plan for our room. No time to go the room. Surgery had been worked out ... so they wheeled me in right away.

As a side note .. the same surgical nurse that I had before met me in prep. She reminded me that she thought I looked just like someone that I won't even mention by name but is older, fatter and a tad more unattractive than me. I told her that was an insult. "Oh ... you know ... people think that people remind them of others all the time. Like me ... they used to say I looked just like the woman who played Wonder Woman on TV." I looked at the nurse who was 5 feet tall maybe, was older than me and certainly not what I remember of Wonder Woman. She added ... "Of course I was a little younger then." 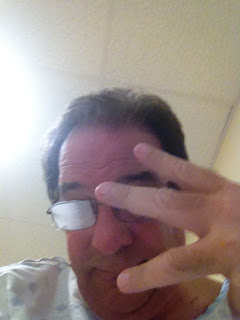 Surgery was uneventful. Recovery was rougher this time ... dragons flew overhead and I got nauseous ... but it was calm by the time I got to the room.

I had no appetite. My throat was killing me (the breathing tube combined with a flu infection I forgot to mention that Debbie brought to me the day before) and my belly was very sore. That night it was a maze of pain killers and I sent Debbie home to really sleep.

I woke up feeling like I never really slept and still had no appetite. The nurses were great as usual. Debbie came back with a Dunkin Donut bag with my favorite: egg white veggie flatbread and a coolata. I ate and drank.

By about 3, we asked Dr. V if he could discharge me. The pain in my throat was much better and the belly was tolerable.

Got home last night at about 7 ... went right to sleep and didn't wake up until 10. Checked all my "parts" and everything seems to be in place.

NOTE: So many of you have been keeping me in your thoughts and prayers and I want you to know how much that means ... truly ... and how it helps me stay so positive. THANK YOU. I couldn't do this without you.

Following you blog and sending love and good wishes your way. Humor and love will see you thru. You seem to have a lot of both.

You and your family are in our thots & prayers.

I was just down in Tampa, setting my daughter, Mary up for USF

@Julie ... Thanks! Glad to hear that Mary is gonna be a Bull. She will love it. Best to you as well.

ENOUGH ALREADY!!!
If you keep having shunt issues, we might just have to drag Bootsie Solomon out of retirement.
Love ya, Kingfish - hope you AND DEBBIE get some rest.
Ann

I just read all of your "Brain Boy" posts. After all that you have gone through, you still have your amazing sense of humor. After 47 years, about half of them spent in some sort of classroom, and having a daughter about to graduate from HS and a son about to graduate from MS, you are still the BEST TEACHER EVER!!! I am thinking about you and pulling for you.

Joel: Sounds like it was a 3 Dog Night. Hope this is the last of these episodes. Too bad you're not 10 years old so you could go to ACH and get some health care!! Stay thirsty my friend.
Ken

Thanks Kathy. Knowing you as a student .. I have no doubt that you are truly an amazing teacher as well. Best to all.

Lol ... Now that's a blast from the past! Thx Miss Ann

I am so sorry to hear of this latest ordeal. Unfortunately I think it so typical of "emergency" room visits. Hang tough and keep us smiling.