It Was Great Talking to You ... Again 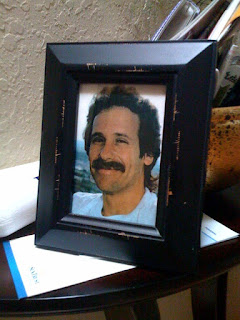 On November 21st, my brother Wayne would have been 59 years old.

The holidays are always a time of reflection ... so I hope you won't mind a "redo" of a blog entry I wrote about Wayne entitled It Was Great Talking to You from June of 2010:


I spoke to my brother last week.
These days, I do all of the talking. Last week it was about everything from funny stuff we did as kids to funny stuff my kids are doing today. He used to steal my mattress when we shared a room. He thought mine was much more comfortable than his so I let him think I didn't notice. Every night, I'd put some toy soldiers or little train cars under his mattress. He eventually traded back (thinking mine had somehow gotten much more uncomforatble).
We reminisced about Esther... and the tricks that we would dream up to drive her crazy. One night I told Wayne to hide in the closet. I put a pair of his pajama bottoms over the air vent that sat over the floor into the closet. I put slippers over the foot holes so that when the air was on, the pants ballooned and looked like Wayne was stuck in the vent.  At the right time ... I yelled to Mom that Wayne was stuck in the vent. She ran into the room as Wayne started moaning from the closet ... then she literally ran outside and started to yell for all the neighbors to help pull Wayne out. When Wayne and I appeared outside ... I pretended it was a miracle that I pulled him out. She never noticed that he had different bottoms on.
Over the last 15 years, Wayne has been in my thoughts just about every day. The last few months, I've spoken to him often for strength and for guidance. Wayne passed away in 1995 from a malignant brain tumor. I remember the way he lived his life. I remember how he continued on ... kept a positive attitude ... despite multiple surgeries, bone marrow transplantation and loss of bodily functions. He made a point of helping others in need of support during the years that he could.
He's still a great listener.
at December 03, 2011

Thanks Joel, for sharing about Wayne. I always have believed the measure of success lies with how many lives a person has affected for the good. Sounds like he was one of those people.

"I Was Born Very Young" has been included in this weeks A Sunday Drive. I hope this helps to attract even more new visitors here.

I worked with Wayne in the 1980's. He was a great guy, alot of fun, and had extraordinary talents. I miss him alot.

@Chris ... Thanks for the wonderful comments. I happen to agree. He was also a great drummer. Never did find a replacement!