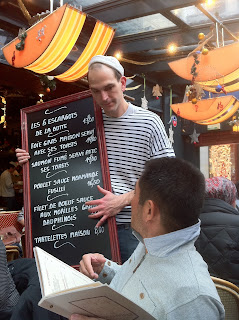 More rain. So today we decided to just wander and watch people.

Our waiter at lunch was the perfect start. When we first got there, he motioned us to a table the size of a postage stamp squeezed between two other postage stamps with normal sized people. There was another table on the other side of the restaurant that was a tiny bit bigger. 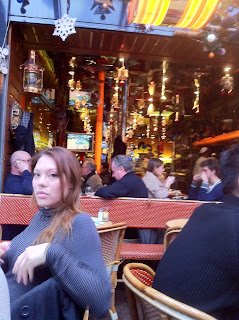 "I guess we will sit here," I said.
He was actually a friendly enough guy (for a Parisian). He said Merci once. I liked his sailor duds. I asked him if he was a fan of The Village People. He wasn't amused ... must have been my accent.
I took this picture of the cafe and this girl (I call The Poser) decided to get in the picture. She was sitting forward when I aimed and then leaned back as soon as I snapped it.
She's not a Parisian. She's a new version of a Valley girl.
If you listen closely, you can't tell what part of the country she's from because the last words in her sentences are stretched out to fill space and time. Always followed by ... "you know?"
"Did you really think I wanted that bread ... I mean realllllllyyyyyy. You know?"
"I was soooo sleeeeeeeeeeeeeeeeeeeeeeeeepy. You know?" 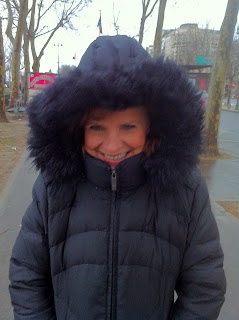 I ran into one of the Muppets on the way out. I think it was Grover or Kermit or Elmo. Not sure ... looked alot like Debbie, but I know she wouldn't be caught dead in a coat like that unless it was really raining hard.
She tripped a few times on the way back and muttered something about not being able to see. By the way, the water apparently comes inside as well as out on this jacket. Is that what they mean by reversible? 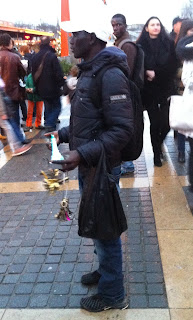 Here's one for you. Street vendors in Paris in and around the Eiffel Tower all sell the same stuff.
They travel in packs.
Ten or more come at you individually within a few feet of each other holding little Eiffel Towers that blink and change colors. When you turn down one of them ... the next one appears with an identical spiel.
I told the 354th guy no because ... "I like what the other guy is selling better."
He called him over to try to close the deal.
"Is he forrrr reaaaaalllllllll? You know?" 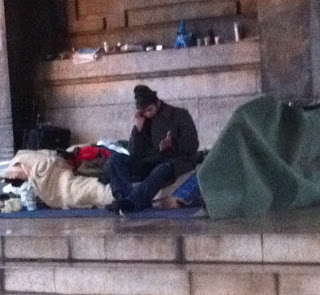 There are not many homeless people ... at least we didn't see many.
But this guy took the prize. Our homeless people could learn a lesson from France.
Check it out. He lives under a bridge ... but he carries a cell phone!
at December 31, 2011