Is My Table Ready? 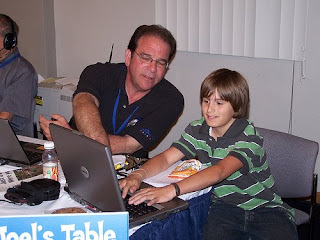 This weekend is the All Children's Hospital Telethon, and I'm not there anymore ... gonna watch it on TV like everyone else. It's like watching my baby ... all grown up. I only gave birth ... by the way. There are MANY loving parents who have nurtured and grown the telethon over the years and I couldn't be prouder.

I have 25 years of great stories (many of them off camera).

What a great team: Steph "Do it all" Hall and Ann "Somebody wake Bob Hite up!" Miller were (and still are) the telethon queens. Doing everything from producing the show to raising the money. They gave me a table (It shrunk in size over the years) with my name taped to it. I was the boss ... so they made me feel like I was really doing something important ... smart women.

We had our telethon traditions.

Our first years were broadcast live from Busch Gardens. We'd set up on Saturday morning, unload the truck and head to Fuddruckers for lunch. We used to complain about indigestion all night ... but it never stopped us from going there. Ann always baked cookies ... chocolate chips ... and Bill Horton brought a mini refrigerator that we strategically placed under my table (my idea of course). 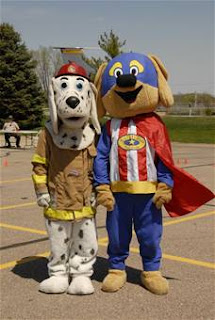 Most memorable were our special guests that would help "man" the phones throughout the weekend. There was Safety Pup. (One of those dogs on the left ... I can't remember what he looked like). I do remember he came to answer phones ... and he couldn't talk! That's right ... he sat on the phone banks with a phone to his fake ear and nodded alot.

We had a special band of scary clowns that we dubbed the carpet heads because their wigs were truly made out of pieces of carpet.

One of our donors was from a Kiwanis Club and the year he presented a check, it made our blooper reel for many years to come. In his interview, he told host Bill Ratliff that "He had a bone to LICK with him". Bill could hardly contain himself for the rest of the interview. 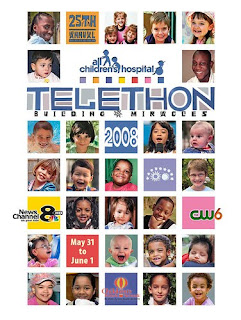 There was Little Tommy Duckworth. (Tommy was called Little Tommy for 25 years). He spent most of his childhood at the hospital with a series of medical issues and became the face of the telethon for years. He was a cute kid ... everyone wanted him to sit on their laps ... trouble was Tommy would also pee on their laps as well (cute yes ... but devious!!!!).

And tiny Katie who brought tears to everyone's eyes when she belted out melodies that would make every Americal Idol contestant jealous.

What memories you have and what great things you did too!!

Yes Joel. Your table is still there. I'll still be planted in the seat to your left. We're growing this year with a live facebook chat room on the telethon minisite, yes...have you seen it? Www.allkids.org/telethon! It's a great thing. We're even featuring the telethon stories on the homepage. We'll miss you, but know we will always fondly remember it as Joel's table. (Darrell)

@Betty... I have been very fortunate in my life.

I bet that table is there and still has your name on it. What kind of drinks did you keep in that little fridge?? Fruity and alcoholic? Seriously though, you are cool beans for giving life to a beautiful thing. I vote you go crash the party and show 'em how it's done!

So YOU'RE the one who put John Sipos up to asking me about possible Telethon visits from Dr. Pete E. Atric on his radio show, huh????
Seriously, the table's there. The cookies are (mostly) baked and you know I'll always save one for you.
Love ya -
A

@ Toni ... Thanks for the kind words ... Yep the drinks were frosty and cold (at Busch Gardens)