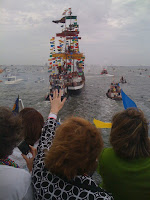 The rain started at one o'clock and was steady all afternoon. It didn't seem to dampen spirits but it did impact the crowd that assembled for the 96 year old Gasparilla Pirate Fest.

To Tampa residents, Gasparilla is ... boats,  parades,  pirates,  booze  and "merriment". Up until this year, it was also ... peeing on the sidewalk and exposing various parts of the body for gifts of beads (just like my old home town, New Orleans). When I say "up until this year" it's because this year, the police did an incredible job of reducing alcohol consumption ... the basic source of evil deeds.

I finally had a chance to experience it first hand. This year ... I was asked to be one of the parade judges (an exclusive "secret" honor) by my good friend and Gasparilla historian, Victor Leavengood and his lovely wife, Lee. Vic was a "pirate" since 1965 and was proud of it. He shared a little of the history of the celebration of Gasparilla (and then told me it was all a legend that someone made up as an excuse to throw an awesome party.)

THE (unofficial) HISTORY OF GASPARILLA

The name and foundation of Tampa's traditional Gasparilla Carnival come from legendary pirate Jose Gaspar, "last of the Buccaneers," who terrorized the coastal waters of West Florida during the late 18th and early 19th century. Gaspar, given to calling himself "Gasparilla," served as a lieutenant in the Royal Spanish Navy for five years until 1783 when, upon seizing command of a Spanish sloop-of-war, he with his fellow mutineers set sail for the Florida straits. And so the young Spanish aristocrat-turned-pirate began an adventurous life as outlaw of the sea.

When Jose Gaspar died, he supposedly left an untold fortune in buried treasure somewhere along the Florida coast. Though that treasure has never been discovered, the story of the swashbuckling Gasparilla was unearthed and his memory revived in 1904 when Tampa's social and civic leaders adopted the pirate as patron rogue of their city-wide celebration. Miss Louise Frances Dodge, society editor of the Tampa Tribune, was planning the city's first May festival. At the suggestion of George W. Hardee, then with the federal government in Tampa, she decided to develop a theme for the affair based on the legend of Gasparilla.

Secret meetings gave birth to the first "Ye Mystic Krewe of Gasparilla," whose forty members planned to surprise the populace with a mock pirate attack on Tampa. Masked and fully-costumed, the first krewe arrived on horseback and "captured the city" during the Festival Parade.

So there you have it.

Depending on who you talk to, there was a Jose Gaspar(illa) the pirate ... or there was no such animal.

Either way, Tampa has been captured by businessmen dressed as pirates, smoking big cigars and drinking whiskey since 1904. Their women follow closely behind on the Royal Barge (actually a three deck party boat) as the actual Pirate Ship (a floating barge dressed up like a pirate ship) is filled with 700 swashbucklers who land on Bayshore Boulevard and whisk away the mayor of Tampa ... in a tour bus.

What follows is a parade of 104 floats and bands and beads.

Vic and I judged each ... from our comfy chairs on the top floor of the Royal Barge. Our first place commercial category went to the Hard Rock Casino/Hotel float with Mike Alstott, Grand Marshall throwing rubber footballs to the crowd, the Unsinkable Krewe of Molly Brown (Grand Prize winner for their float with the Titanic sinking), The International Independent Showmen's Association (no, I didn't make that up) float won first place in the Special category for their rendition of carny food and carnival workers ... and so many more.

Here are some pics: 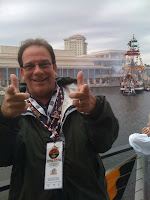 This is me ... pretending to be a pirate capturing the city with the real ship behind me. Anyone surprised that they wouldn't let me carry a real gun? 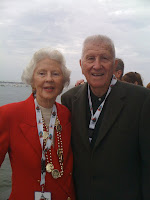 The Leavengoods ... young octogenerians and such a pleasure to be around. True treasures! 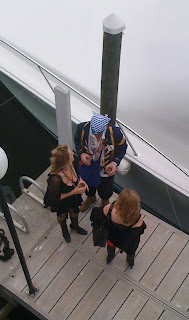 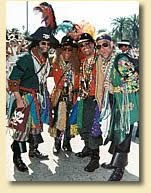 Some of our city fathers.