Flew in from Toronto the other night.

We were there for the International Bowl ... doesn't ring a bell? Well ... no one in Toronto heard of it either and it was played in THEIR stadium on January 2nd between USF (University of South Florida ... my employer) and NIU (Northern Illinois University ... somewhere outside of Chicago). That should narrow it down ... outside of Chicago ... like the rest of the country, perhaps?

And the win was the only thing that warmed our hearts and our bodies ... Toronto was cold. I was outside for a total of 5 minutes in the 4 days we visited. Thank God the city is almost entirely connected by underground PATH's. They are not always in a logical sequence but if you leave breadcrumbs you can find your way back to the Fairmont Hotel (which looks exactly like it did 80 years ago ... same plumbing and even thinner walls).

Here are some pics of our trip ...

This was our taxi.

Our driver refused to turn on the heater. Visibility was terrible but we managed to make it the two blocks to the Westin Hotel where we celebrated New Year's Eve. 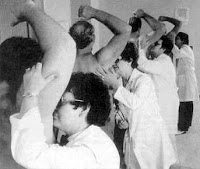 Once we got to the Westin ... we danced all night (mostly holding our noses).

One of the couples (maybe a couple of the couples) had apparently been protesting underarm deodorant ... STAUNCHLY protesting ... by the smell of it. We were all later checked by the hotel staff before midnight to determine just who the culprit(s) were.

Fortunately, The Rogers Centre is an indoor stadium. It's comfortably built for enjoying hockey and baseball. Unfortunately, football happens once a year and is not well attended. At our game, the announcer didn't use any sound equipment to give the play by play. He simply stood on one of the 20,000 empty seats and used a bullhorn. We heard everything just fine. 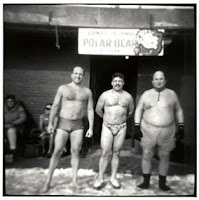 It wasn't until later that we found out where all the Torontonians spent game day. They celebrated outside in sub-zero weather with their buddies in the Polar Bear Club.

Makes sense  .... Why would you spend the day in a comfortably heated stadium when you can take off your clothes and jump in an icy lake?

Absolutely too funny!!! Good thing I work by myself so I didn't have to explain what I was laughing out loud about!

I'm glad your wife was able to attend. Sounds too dreamy to miss.

Chrissy ... it was the dreamiest!