A Kick In The Grass 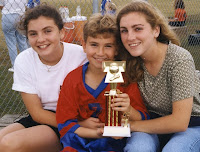 I ran across soccer pictures the other day when I was "cleaning out" some albums.  By the way ... for those of you who know me, "cleaning out" a photo album means moving pictures around and putting them in exactly the same cluttered place  ...

This picture of the three kids was taken at one of Josh's 4,732 soccer games ... They played teams like Mayakka Mullets or Land O' Lakes Butter Eaters.

Actually ... each of my kids played soccer at different times and different places. To be exact: CLUB SOCCER. We soccer parents KNOW the difference between rec soccer and club soccer.
Club Soccer = thousands of miles of travel, celebrating every major holiday playing tournaments in large metro areas like Nohouseformiles, Tennessee or Scaryville, Georgia and meeting interesting people from every part of the world (many were on parole or were kicked out of their anger management classes). 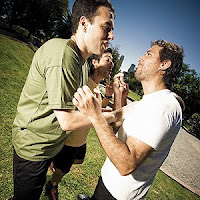 Some of the games got pretty physical. Elbows flying, punches thrown, vicious insults  ... and those were from the parents. I remember many games where mom and dad were thrown out of the area ... having to watch the game from an adjoining field. Funny thing is ... I remember one Dad (who will remain nameless) getting a lecture from his son on correct behavior.

Our club was called Northeast Raiders. There were numerous rec teams and club teams associated with the Raiders and (as in all the soccer programs) there was always a great need for volunteer support. I did my part as a coach and manager and even served as vice president of the league. I made it clear that I would only do the vice president board appointment and that was it. Two weeks later, the president was "fired" and I was appointed acting president.

It was the most miserable time of my "volunteer" life.

Where can I get REALLY good shin guards?
Why is my daughter not playing enough?
I want my kid to switch teams. Do I have to sell my house?
My son needs to eat during the game. Can I pack him a lunch?

Funny thing is ... these are all TRUE.

Eventually I resigned my post when I found a way to transition. I gave it to a guy who did a great job until he sold his house and moved out of the country.

The  Catholic Church took over the league the next year.
at January 10, 2010