I Want A New Drug

I thumbed through the St. Pete Times this morning as I was lying on the gurney awaiting my turn to get a tube with a camera shoved down my throat. Believe it or not ... I did this voluntarily so that my friend and stomache doctor, Scott Halgren could afford to work less days this year.

There's another descriptor for this pagan act ... an upper endoscopy. For those of you that have not had the pleasure of having this procedure done, you don't feel a thing. You get a little Michael Jackson cocktail first and (unlike Michael) you should wake up a half hour or so later (it seems like a only few seconds) feeling "groovy" and a little hoarse.

So ... patiently awaiting my turn ... I focused my attention on the editorial page. There were two big editorials : One was about my present employer (USF)  and the other was about my former employer (All Children's Hospital). The USF editorial was about the end of an era (Coach Jim Leavitt's departure) and the ACH editorial was about the beginning of an era (Opening the new hospital with incredible state of the art equipment and facilities). There was a reverse irony here ... my USF carreer had just begun a year ago when my 30 year ACH carreer ended.

I thought back to the time I joined the staff at All Children's as the Public Relations Coordinator and one of the first things I remember doing was meeting an incredible group of teens who were battling cancer. They had formed a support group and invited me to a group discussion to share ideas for a "project" that they could do together to tell their stories to other teens. We talked about writing a book together, speaking to classes, filming their life stories,  ... and then the light bulb came on. 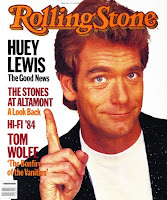 We would produce a music video and they would be the stars. They picked the Huey Lewis song, "I Want a New Drug". We got permission from the music publishers to change the lyrics to mirror their feelings about Chemotherapy:

We re-recorded it with THEIR voices, had funny routines planned and caught the attention of NBC who came to the hospital to film it all ...