As we pass through towns like Crystal River, Inglis and Withlacoochee traveling down Hwy 19, we have passed about 10 "Stroke" billboards, Apparently ... this part of the country is either very health savvy, filled with large medical centers or populated with lots of high risk fat people who smoke and eat fatty food. I vote for the latter … although I did spot a walk-in cliic for farm animals and their owners. 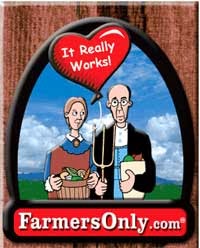 Speaking of farm animals, there was an ad during the Wake Forest game that featured two farmers and a sheep dog. One of the farmers was talking about how lonely he was. His dog told him he should look for a woman on FarmersOnly.com. Seriously … no SNL lie … it's a REAL thing.

Not sure whether it aired across the country or only in Cedar Key. 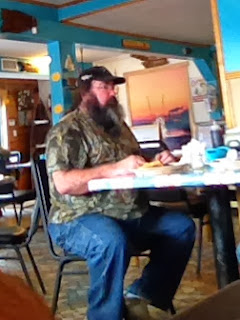 We stopped for a bite to eat in Withlacoochee. It was a breakfast place that attracted hunters so we knew the meals were gonna be big and delicious. We were right.

Sitting next to us was Ned Beatty's pig farmer. He was also the model for the wig and cap place we posed for pictures on Day 2. 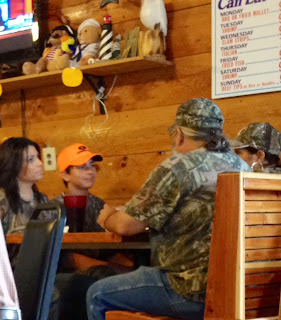 In front of us was a family of hunters: grandpa, grandma, a daughter and a grandson. I'm just guessing, of course. Grandpa could have been married to any one of them.

They were all in camouflage so it would be hard to tell. 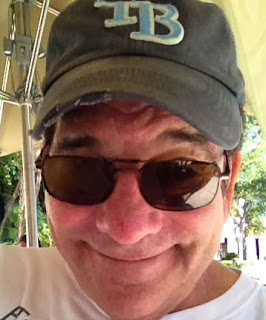 Debbie just told me that I managed to insult everyone today.  She wanted me to change "fat" to "overweight". THERE ,,, that is much better. Sorry if any of you were insulted by this … If you were, don't visit Cedar Key.

If you weren't … remember I am an equal opportunity OFFENDER!
at October 20, 2013