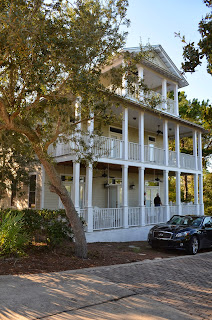 Today we set out for a special trip to celebrate Debbie's birthday: Cedar Key, Florida, about 2 and a half hours from our house.

I had suggested a number of different venues like Paris, Rome, London (not really) or thought about maybe driving north to see the leaves change (But I think that was closed by the federal government and just reopened today). So it was off to Cedar Key ... which boasts an impressive Seafood Festival this weekend. Deb and I, two other couples plus Tom and Dennie (Debbie's twin) all rented a house and shared the adventure.

The house is very cool. 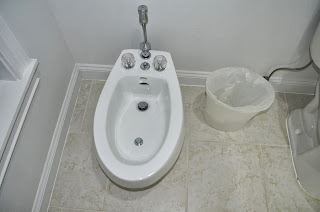 We drew numbers and Deb and I were lucky enough to get the master suite. In addition to being really spacious, it had an extra water feature in the bathroom. I think it's a water fountain that sits next to the toilet (a funny place for it) ... I know it can't be another toilet because I can't flush it. 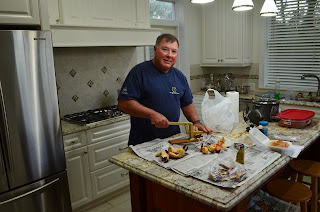 Downstairs, Doug was cracking open some stone crab claws as an appetizer. The cracker was pretty big and had multiple tortuous uses that Doug seemed hesitant to detail for us. 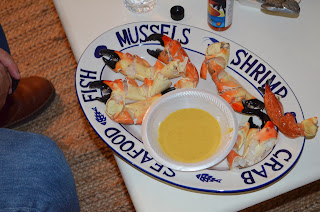 The crab claws came from a store name (appropriately) Crackers ... and were delicious. So was the fish spread that Doug and his wife Deb picked up on 4th Street in St. Pete. 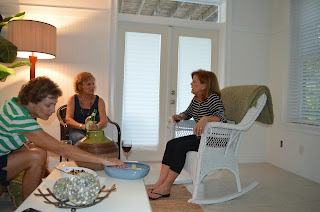 We chatted about how screwed up the government was, personal medical issues and who we know that died recently. 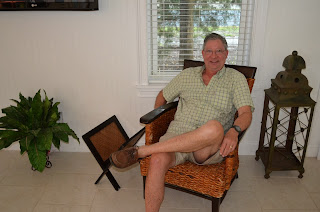 The men watched old episodes of The Lone Ranger, Seinfeld and Jeopardy (Mark knew all the answers ... and is apparently a Jeopardy/trivia savant). Yes ... the rest of us felt stupid.

Barb made a delicious Italian dinner of pasta, sausage and balls. I'm ready for bed. I think I'll get a tall glass of water from our water fountain, take my meds and go nite nite.

As Mick Dundee said, "it's for washing your hind side!"