Apparently, Beggars CAN be Choosers 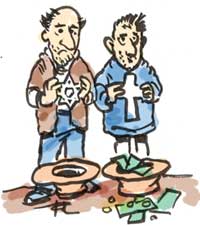 From my brother-in-law Tom:

Two beggars are sitting side by side on a street in Rome. One is holding a cross, the other one is holding the Star of David. Many people go by, look at both beggars but only put money into the hat of the beggar holding the cross.

Eventually the Pope comes by. He stops to watch the throngs of people giving money to the beggar who holds the cross while none give to the beggar holding the Star of David.

Finally, the Pope approaches the beggar with the Star of David and says,
"My poor fellow, don't you understand? This is a Catholic country and this city is the seat of Catholicism. People aren't going to give you money if you sit there holding the Star of David, especially when you're sitting beside a beggar who is holding a cross. In fact, they would probably give more money to him just out of spite".

The beggar with the Star of David listens politely to the Pope, smiles, then turns to the beggar with the cross and says, "Moishe, look who's trying to teach the Goldstein brothers about marketing!"
at June 02, 2013