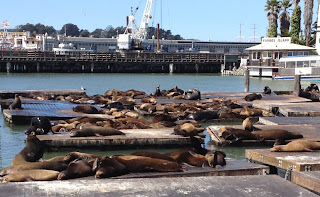 It's day three ... just finished the 5th of my 6 business meetings

After a while everybody starts to sound like these guys on the left  and I start to feel like them too.
Actually ... that IS me. I'm the third fat seal on the left.

Sometimes, I wonder who gets the most interesting views ... the people watching the seals lying on the barges ... 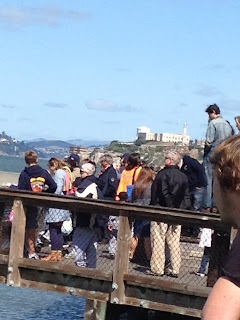 There's a little guy somewhere in the middle of the pack giving a play by play and holding seal pelts for everyone to feel. I, of course, had to check in out. Seals have coarse fur that feels kinda like horsehair.

I expected slimy and smooth.

I didn't want to ask too many questions about how they got the samples of seal skins ... especially when the fur handler talked about conservation and social responsibility. 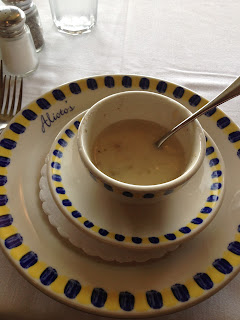 Speaking of seals (lol) the food here is superb.

Ate at Alioto's for lunch. Clam chowder to die for. It probably WILL kill me ... along with the 50 ponds of crab, shrimp, french fries, bread, scallops and lobster I've eaten ... and that was before noon. 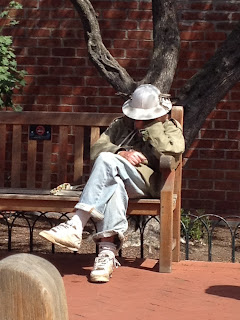 Stopped in Ghirardelli Square for a few (hundred) chocolate bars.

Spotted this fella who apparently had a bad sugar reaction. He had chocolate candy wrappers strewn around him . I asked him if he was okay. He said he was fine ... just on spring break.

See what candy can do to you? 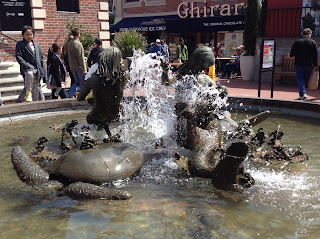 I noticed some kids playing in the fountain. The police don't fool around here. Dance in the fountain and you are forced to stand there stiff, blue and cold for years. 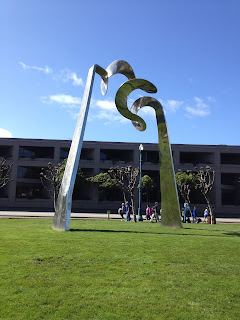 Of course you know that the streets of San Francisco are crazy. They wind around, go up and down like a roller coaster and depending on your cab driver ... make you beg for the motion sickness bag.

I thought at first that this was a sculpture. I think it's really a directional sign to Lombard Street. 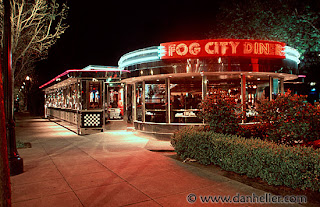 Well ... One more dinner meeting tonight at Fog City Diner with the owner of this cool restaurant.

I'm looking forward to it ... then I'll pass out again with my fellow seal brothers back at the barge ... before I fly out tomorrow.
at April 04, 2012