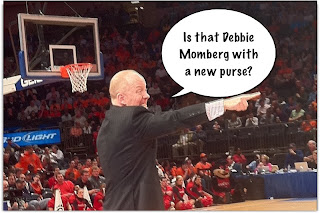 Notre Dame was the second game of the Big East Tournament for USF and unfortunately ... our last.

We were ahead for most of the game. A blown layup, a missed free throw and a couple of other timely mistakes took us into overtime and ultimately, a loss. Now ... we are awaiting word on whether we have made the cut for the NCAA Regional games.

But this was NOT the big story for me this week.

No ... that happened one day earlier when Debbie and I were in the bar of the Omni Hotel having an Irish coffee after our big win against Villanova. As I was telling a particularly animated story to our assembled group ... my hands flew across the table (I couldn't help myself) and knocked the cup into Debbie's purse.

Debbie froze ... coffee seeping through her purse into her lap. There was a moment in time when I was sure I saw a death look in her eyes. Not her death ... mine.

When she did talk to me, it was simple and direct ... "You owe me a new purse. An expensive one!"

This has already become Urban Legend among our friends ... and total strangers. People move away from me when I eat, glasses are put on the other side of the table and even waitresses whisper when I come into the room ... "HE'S THE ONE. "

I swear, in the middle of the Cincinnati game yesterday afternoon, Debbie walked into the Garden holding shopping bags and I heard Mick Cronin say ... "Is that Debbie Momberg with a new purse?"