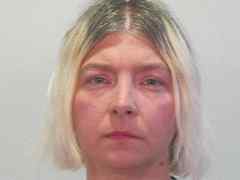 
We all know the dangers of driving while texting or talking on a cell phone. Now Florida Keys law enforcement officers add a new caution: Don't try to shave your privates while driving, either.
Florida Highway Patrol troopers say a two-vehicle accident on Cudjoe Key was caused by a 37-year-old woman driver who was shaving her bikini area while her ex-husband took the wheel from the passenger seat.
It wasn't a close shave -- it was a total wreck.
"She said she was meeting her boyfriend in Key West and wanted to be ready for the visit," Trooper Gary Dunick said. "If I wasn't there, I wouldn't have believed it. About 10 years ago I stopped a guy in the exact same spot ... who had three or four syringes sticking out of his arm. It was just surreal and I thought, 'Nothing will ever beat this.' Well, this takes it."
Megan Mariah Barnes should not have been driving.
The day before the wreck Barnes was convicted in an Upper Keys court of DUI with a prior and driving with a suspended license.
After the accident Barnes and her ex-husband, Charles Judy, drove another half-mile, then switched seats. Judy then claimed that he was the driver.
But the burns on Judy's chest from the passenger-side airbag deploying told another story. The airbag in the steering wheel did not deploy, according to FHP.
Troopers charged Barnes with driving with a revoked license, reckless driving, leaving the scene of a wreck with injuries and driving with no insurance.
Remember: stay focused when driving and use razor-sharp judgement.
at April 29, 2011