There's a New Sheriff in Town

Last night we went to Chilis and then to a movie with Josh and his girlfriend Theresa. We saw the new Will Ferrell movie, the Other Guys ... classic Ferrell ... funny as hell and totally disjointed.

At dinner, we reminisced (well ... I did. Josh just groaned).  I brought up a few more embarrassing times in his life (my job as his dad) to which Josh said, "Just don't put that in your stupid blog." 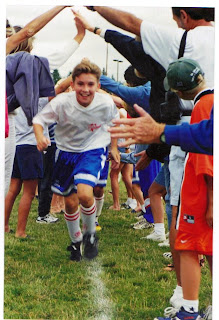 When Josh was about 12, he was thoroughly entrenched in club soccer.

On one particular afternoon, as I sat down in the bleachers during a game, Tom ... one of the other soccer dads ... pointed to Josh as he checked a player and said, "The sheriff's in town!"

I looked out at Josh and smiled.

"The sheriff, huh? That's an interesting name for him."

"That's what we all call him now," Tom said.

"Oh". I pretended to know what he was talking about. I strained my brain trying to think about all that happened yesterday .... Hmmm ... He forgot his lunch, lost one of his shoes, killed another fish in his fish tank ... I gave up.

"He beat up that big fat kid at school that terrorizes all the 4th graders." Tom laughed. "You didn't know? He's a hero. That kid came through the locker room and pushed Bobby Swift to the ground. Then Josh just decked him." 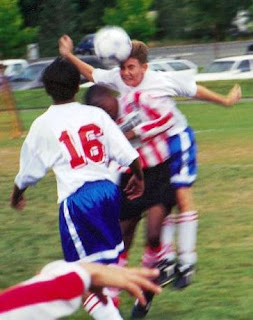 I was stunned. I looked back out across the field at Josh ... Little skinny Josh ... Who looked like he was two feet tall from that distance. He decked the bully? My son Josh? As Josh passed the stands, a couple of parents yelled out to him "Way to go sheriff!"

The game ended  ...  and we headed home. Josh was pretty quiet in the car just staring out the window.

"Why are you calling me sheriff?"

"I thought that was what everyone was calling you now."

"Apparently you cleaned up the town ... beat up the bully at school."

Josh was wide eyed. "Beat up the bully? Me?"

I frowned at him. "C'mon. I heard the story. The kid dropped Bobby and you decked him."

"Who told you that?"

Josh shook his head. "Okay ... here's what happened. This kid Jake came up to Bobby and pushed him hard into the locker. Bobby has his arm in a sling, you know? And hit the door of the locker with his bad arm. I got mad and pushed Jake back. He tripped over the bench and sprawled out on the floor. Everybody started laughing."

"That was it. He ran off. I think some people think he fell because I hit him. That's why they are saying it."

Josh looked out the window. We were both quiet for a while. I thought about what brilliant words of advice I should give him about conflict resolution and all that PC stuff.

"Hey sheriff. No need to say anything else. I don't think anyone's gonna mess with Bobby again ... or you either for that matter."
at August 07, 2010