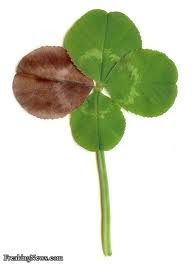 We couldn't get on a flight to DC because of that space available / non-rev / former employee thing I told you about ... So we had to make a quick decision. Deb got on the computer and found a flight from Jacksonville that we might be able to make ... So we jumped in our car and drove from Charleston.

"Orlando is 7 hours away." I said calmly.

Debbie spouted out 15 more remote cities and I had enough. 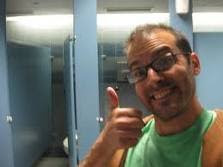 At this point we pulled into a gas station. I shared the bathroom with a guy who clearly had Tourettes or was extremely pissed off about something. I joined him in the choruses.

We were now 3 hours into the drive when Alissa, who we were going to visit, called and asked where we were. I told her that we might be able to drive to South Dakota and get to DC sometime in 2012.

"So ... what do you want to do Deb?" I knew that was a mistake. Deb had a brilliant idea. Her favorite place in the world was just a few hours away ... Disney World. That's right. Debbie is a Disney Savant. She is all things Disney, including ... I found out ... what time the monorails depart and every stop they make. This is the woman who ... despite the fact that she didn't have children... knows it better than any 5 year old.

So I called the Disney Chick who handles the reservations ... sorry, she is called a cast member ... and she said they have a room available at the Contemporary Hotel. Okay ... the Contemporary was the FIRST hotel in Disney World ... that was 40 years ago. It's as old as Mickey almost ... but I said okay ... fine. We might have just enough money to stay there. We did.

They put us in the "extension". That's the place where every child under two and in need of an on-site laundramat stays. The heat from the dryers creates a rain forest throughout the whole facility. And the monorail COMES RIGHT THROUGH OUR ROOM. 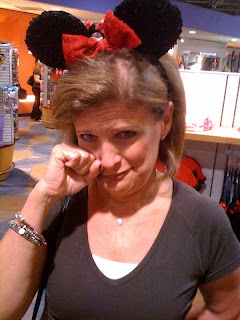 Tonight was the final straw. Debbie insisted on having those stupid Mouse ears ... she tried begging, stamping her feet and even tears. I was adamant about this.

I told her absolutely NOT. 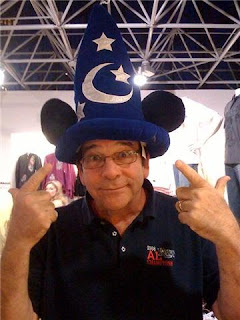 I spent our last few bucks on a great hat that was a perfect fit for me.

This made me smile this morning! I love the mouse ears and she looks totally HOTT in them! I guess your hat is okay....
Joking! Glad you guys are having fun!!!

Love the hat and ears. So to get to your first destination, why didn't just anyone click their heels? Geez, it works for me!

@Virginia ... We tried the heels but no luck.

You hat is...cute :) I have to give the sexy hot thumbs up to the mouse. She knows how to work those ears!!

No argument there Toni!