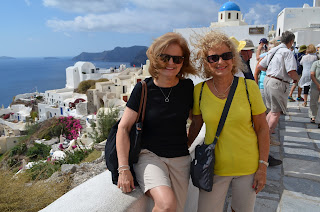 Bright and early on Day 2 we hopped into Mike's cab and drove to the Athens Airport. We decided to visit the island of Santorini. It wasn't a port on our cruise and we had a couple of days in Athens until the ship sailed on Saturday.

Aegean Air whisked us off to the little quaint island the girls read about. Whisked is probably not an accurate verb to describe the travel experience. It was more like a cattle call followed by a short shuttle bus trip to the plane. But it was a pleasant flight and very comfortable.

Santorini is the home of a few towns but by far the most visited are Oia  (pronounced EEYA) and Fira (FEERA).

We started at Oia. Known for beautiful sunsets and picturesque architecture, we took a cab to the town square and wandered the winding path through the shops. It actually took about 13 minutes for Debbie and Dennie to spot the most expensive jewelry store on the island. The owner had pictures of Angelina Jolie, Ryan Reynolds and Susan Sarandon posing with him, all buying shiny things.

Tom and I broke into cold sweats. 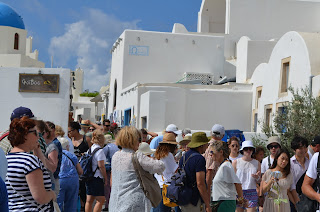 Constantine became our new best friend (after both girls bought jewelry). He toasted us with Ouzo and told us about the best places to visit on the island. Ammoudi Bay was at the foot of the "120 steps" to the water. It had "the best restaurants and was a beautiful spot to dine". Constantine offered to drive us down and pick us up. Dennie said "We will walk it."

On the walk down ... we all could have killed her on the spot. 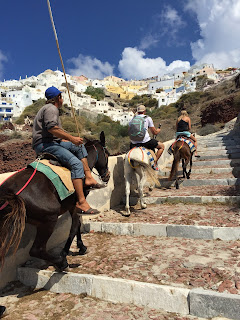 The steps were made of cobblestones and wood ... only crazy people and donkeys took the path up.

It was a 20 minute walk which seemed more like 2 days.

We stepped over the bodies of exhausted tourists ... bloated in the sun. The bones of others were strewn across the steps ... donkey feces were everywhere.

Who said 120 steps? Hah! 1200 was more like it. Our knees and backs ached. This better be an incredible spot to see! 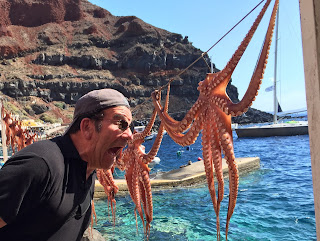 When we reached the bottom ... I saw the restaurant ahead.

I immediately headed to the nearest thing I could find to complain about the donkey feces. Turned out to be an octopus that had no intention of telling his manager so I just decided to join the others at our table.

By the way ... It was a beautiful spot but the food was just average (I might be biased based on the fact that I couldn't really taste anything for a few hours). 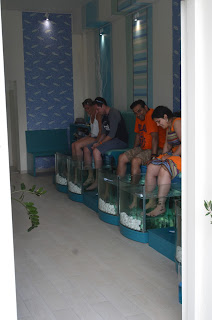 Constantine picked us up at the nearby parking lot to travel up the hill (mountain) to get the finished jewelry and then had a driver take us to nearby Fira.

Oh ,,, I almost forgot. One of the places that we peeked into was a shop named Smiling Fish. Get this ... you put your feet into water tanks and let tiny fish (billed as toothless ... hah!) suck on your feet and ankles to get rid of dead skin. Apparently, when your economy is as bad as it's been in Greece ... you will do anything to make money and, by the looks of it, you will always find someone dumb enough to buy it.

There really wasn't anything much to see in Fira that we hadn't seen in Oia. Tom wound up buying his own version of jewelry that I really can't talk about or put pictures of. If you know Tom, you will understand why. 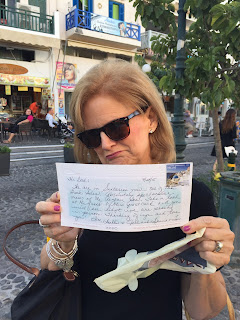 And Debbie won the award for most outrageous comments of the trip so far. She bought a postcard for Larry, her dad. And as she finished writing, she turned to us and said, "Do I put the stamp on the back or the front?'

"Really?" we all said in unison.

"Wait a minute," her sister Dennie (of all people) said. "Debbie, you didn't put the address on it."

"I know ... there wasn't room for that either and don't these cards usually have lines for that?"