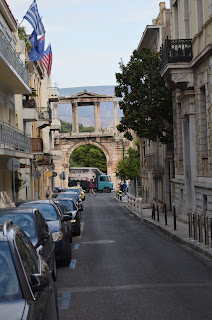 We arrived in Athens on Wednesday morning. (I think). This seven hour time difference thing had me confused.

Two drivers met us at the airport and drove us to the hotel. Mike drove Debbie and me. Nice guy who we will have driving us over the next few days with his partner (wait for it ... NICK. You knew there had to be a Nick. Dennie and Tom drove with Nick who handled two cell phones, a newspaper and a radio while making his way through the streets.

Mike was much more laid back. He told us he worked a few days during the season and then ... oh well ... kinda just laid back. 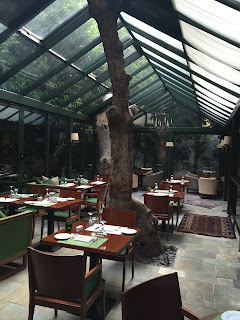 We arrived at the Hotel Herodian, checked in and found out that our rooms were not ready. So ... We sat in the bar area adjacent to a cool atrium bar with a tree in the middle of it. Great waitress who fixed us a couple of cappuccinos  to die for and then went for a walk.

I think we did. I was a little fuzzy ... Just wanted to take a nap. 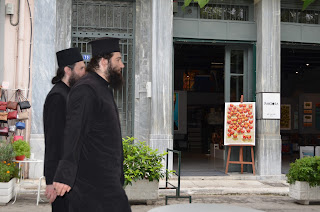 But I do remember taking pictures of tee shirts with Greek insults printed on them and then I shot a still of a couple of priests. Strangely, I felt less guilty about being on a trip during Yom Kippur instead of atoning for my sins (I yelled, "forgive me fathers" and they waved). 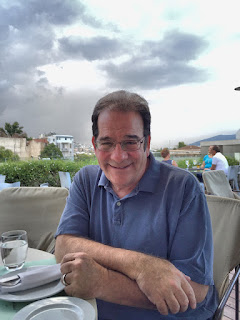 We circled back and landed in the hotel bar for drinks and dinner on the rooftop bar and restaurant.

I had a drink that was named after a famous Greek whiskey named Jack Daniels (found out in our travels and conversations with Greeks of all ages that everything apparently started in Greece).

My drink was made with Jack and Windex.