And You Thought News Was Depressing 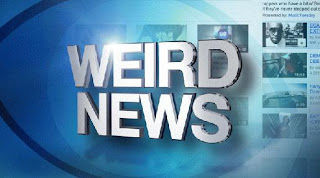 Every so often, I'll scan the pages of HUFFPOST News of the Wierd. Yes, there is such a place (http://www.huffingtonpost.com/weird-news/).

Here are a few gems: 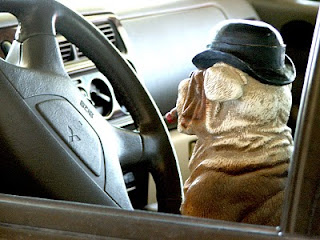 Was He Wearing His Seat Belt?

YORK, Pa. -- Police in Pennsylvania say a dog that was left in an unattended vehicle knocked it into gear and the car struck a pedestrian. West York Police say the accident happened shortly before 11:30 a.m. Tuesday and the pedestrian was found lying in the street. The York Daily Record reports (http://bit.ly/14mziFt) police say the car had been left running when the dog inside pushed it into drive, causing it to slowly start moving. Police say the pedestrian tried to stop the car before it hit a parked truck, but was unsuccessful and was caught between the two vehicles. He hit his head, fell to the ground and was found unconscious. He was treated at a hospital for his injuries.


I wonder how this guy tried to stop the car ... He apparently thought he was Superman, able to leap tall buildings and stop moving cars with his bare hands. Or ... Maybe the guy's wife trained the dog well. 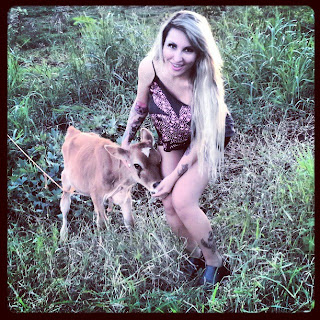 The Booby Prize of the Month

Brazil. -- We've heard of milking it for the camera, but this is udderly ridiculous. Sabrina Boing Boing, a Brazilian model, is woman of many talents including DJ'ing, impersonating Pamela Anderson and her latest endeavor, breastfeeding calves. It appears to be quite the mooooving experience too. Boing Boing instagrammed photos of herself lending her ample breasts to an unsuspecting calf on the side of the road in her native country. Happy as that farm animal might be, people in Brazil are having a cow over the photos, which were accompanied with the caption, "some things don't need to make sense, just worth it!" This isn't the model's first teat tasting experience either. Last week, the self-proclaimed animal lover caused another stir after posting instagram photos of herself feeding an ostrich some ripe fruit, conveniently tucked beneath her exposed breast.

Sabrina currently works at Sea World where you'll see her each day prior to the killer whale show suspended from a trapeeze ... upside down ... with ... well you get the picture. 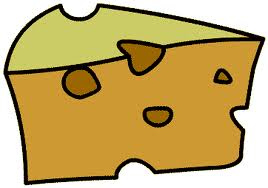 CASHTON, Wis. -- An Illinois man accused of stealing 21 tons of Wisconsin cheese has been arrested in New Jersey.New Jersey authorities say the 34-year-old man from Plainfield, Ill., was arrested Tuesday afternoon.New Jersey State Police Lt. Stephen Jones said Wednesday the man was driving a refrigerated truck carrying 42,000 pounds of Muenster cheese. Jones says the cheese company, K&K Cheese in Cashton, Wis., valued the cargo at $200,000. New Jersey Detective Oliver Sissman tells WISC-TV in Wisconsin that the suspect used false paperwork to obtain the cheese. Company spokesman Kevin Everhart says they can't guarantee the cheese hasn't been tampered with, so it didn't ask for the product back. Jones says if the cheese passes inspections by health authorities it will be donated to charity.

What wasn't reported was that the man stole a Nabisco truck the week before filled with 35,000 boxes of Ritz crackers and was apparently planning a party for some close friends.