The man cave is almost finished.

Actually, as far as I'm concerned it IS finished. The TV set is hung, the components are in the rack, the remote is set, the couch is in place and there's beer in the refrigerator. 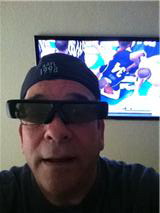 Speaking of TVs ... did I mention that I have the new Samsung 3D TV? When I first bought it, there was only one movie out ... Monsters and Aliens. I know it by heart. Now there are at least ... um ... three more I think.

Regardless, it came with these cool battery operated 3D glasses. Debbie says I look like a reject from the Blu Blockers commercial. Yesterday, I went to Best Buy to get a pair of rechargeables. The battery life is short and I have to pace myself with viewing time, you know? 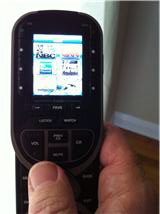 The new remote is really awesome. (I only say awesome when I have my Blu Blockers on). Pre-programmed for everything, it can play every station, movie and i tune on my system. AND ... I can turn on anything I want in any room of the house ... (why I would want to do that I don't know ... but I have that ability).

Josh got me Apple TV for Christmas. It is REALLY awesome. Scary awesome because I think it has now Genius-ed itself into telling ME what to watch and when. 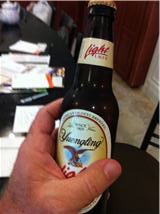 I had to put a picture of beer here. Personally, I'm a scotch drinker ... but of course, in a man cave, beer is a necessity. Yuengling Light, I never heard of. Someone left a six pack here after a party in 2009. Still good though ... huh? 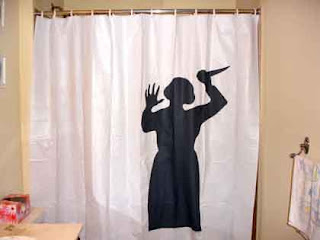 We took this off the shower bar to put up over the sliding doors.

Just kidding, I like this picture and think it's a great deterrent for visitors. We really have bed sheets ... sorry ... Debbie says bed sheet "window treatments".

I think they are gonna be replaced but they work for me.

Oh, I forgot to give an update on the rest of the house. It's ... coming along.

all you need is a pool table and a back scratcher.

Sounds positively manly! You look like a member of Devo.

@Chrissy ... Devo huh? There is a resemblance.