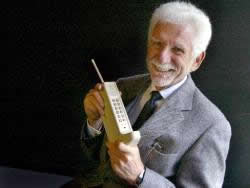 This Sunday, there was a Sixty Minutes segment about Marty Cooper. He's the guy who invented the cell phone. He made the first call in 1973 from a street corner in New York City to the head of Bell Labs Research. He answered the call on his land line. Cooper worked for Motorola and couldn't resist calling his competitor on that day ... right before his press conference.

Great story ... he's still active and involved in the industry at 83.

He's built the company that produces The Jitterbug ... billed as the easiest phone to learn and to operate. There's only one button to search the menu options like voicemail and ring tones ... and the numbers are large and easy to dial. If you get lost in the process ... dial the Jitterbug operator and SHE does it for you. Morley Safer said that "this phone is so easy that an idiot could operate it."

I bought Sam a Jitterbug phone so that he could carry it with him and always get his calls whether he was in the dining room or in the rec room or in his own room. The ring was loud, the phone was easy to carry and he could talk to me or whomever he wanted to whenever he wanted to.

Well, he's had the phone a year now. He knows how to answer his calls and he can call me because I'm #1 on speed dial ... but ... after months of tutoring ... he still cannot pick up his messages, dial long distance or even hear the phone ring. I put it on vibrate AND ring and apparently he can't feel or hear. He always claims that I never call him ... even though I show him on his own phone how many times I did try to call and how many messages I left.

Most of the time ... Sam is perfectly happy sitting in the chair that he wanted us to get from the house in New Orleans (even though it is broken on one side and leans to the right) in front of his TV with the big earphones on.

Oh Pawn Stars! I think I would get along with Sam very well. I also lack cell phone abilities!

@Betty ... Cmon down! Sam would love some company.