Do Over: Esther Returns

It's the end of the week. Time for reflection and time for rest. So ... I took a cue from one of my favorite bloggers, Chrissy, who publishes Second Hand Sundays on her very funny blog "I Should've Been a Stripper".


I'm recycling some of my favorites ... and hope they will become yours ... every Sunday. 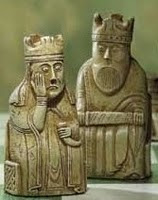 Esther stories apparently have reader appeal. Thank you for all the requests ... and thanks for the wonderful messages many of you have sent me over the last couple of weeks. Here's my personal favorite:


I mentioned that Esther and Sam had adjoining rooms at Menorah Manor ... separated by only a curtain. You also might remember that Sam is very hard of hearing ( deaf, by human standards) ... and over the last few months, Esther's voice was barely a whisper. It was a match made in heaven ... she couldn't speak and he couldn't hear.

About 6 months ago, I got a call from Sam.

"Your mother wants to talk to you about something, Joel."

Too late. He gave the phone to Esther.

There was barely a whisper on the phone.

For some stupid reason I was screaming as if that would help her talk better.


It was 6AM on Saturday. I got dressed, headed over to the nursing home and arrived in the room about 7:30. Sam was watching TV with the big headphones I bought him. I leaned over and pantomimed that I was going in to see mom. He nodded and screamed, "GO SEE HER."

Mom was lying in her bed and had the phone STILL resting on her shoulder next to her ear. Keep in mind that Esther had not been able to move her arms and legs for about a year ... much less hold an object like a phone. Dad had apparently missed that fact and decided to watch TV and just let it sit there.

I put the phone down and bent down as close as I could.

She whispered ever so faintly but loud enough for me to hear.

"I want to leave your father."

I stood up straight.

"Where would you go? Down the hall?"

"Because ... he's sleeping with the nurses."

"He's ... what?" Okay ... at this point I really almost lost it. I could hardly keep a straight face."He's sleeping with the nurses?"

I leaned back and looked through the curtain at Sam. He was still on the chair with the headphones on, pants unzipped, no teeth, snoring and a line of drool was making it's way down his stubbled chin.

I looked back at Esther. "I really don't think so."

I stepped back into Sam's room, removed his headphones and woke him up.

He looked at me. "So? Did you find out what she wanted?"

"Yes." I tried to whisper."She thinks you are sleeping with the nurses."

"What? She wants her purses?"

"No." I was nose to nose with him whispering." She thinks you are sleeping with the nurses." 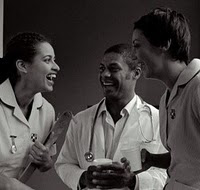 "NO." I lost it. "SHE THINKS YOU ARE SLEEPING WITH THE NURSES."

I loved to hear the Sam, Esther, and Wayne stories when we were at GA. Hope that you are feeling better!

I missed this one earlier......glad I read it today!