At 16, there was something truly magical about older women. Of course when you are 16, older could mean by 6 months. Or in the case of Marci, it was 17 and a half.

Marci was my first older woman. 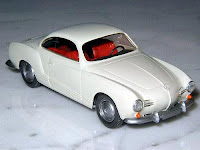 She was a senior ... and drove a '63 Karmann Ghia. I thought it was the coolest car on the planet. I hadn't started to drive yet. Our "romance" was all after school stuff. I never saw her at night and she would always drop me off a few blocks from my house. I wanted the world to know ... she wanted no one to know. Yes sir ... a match made in heaven.

I have no idea how long we kept this up ... seemed like an eternity but it was probably only a few months. I remember weird stuff like her back seat, her checkered blanket and her girdle. Yes ... most Jewish girls of that era wore girdles. They were long waisted panty girdles that did not come off ... ever. Well maybe with guys named Rocco ... but not guys named Joel.

A year later, I dated an Irish girl named Ann (she was older than me, too) ... no girdle for her. But I knew that it was only a matter of time before I would blow that one. One night, we double dated with another couple and parked the car at the Lakefront. In the middle of a steamy embrace, Ann accidentally passed a little gas. I couldn't help myself and burst into laughter ... so did the other couple. That was our last date ... I sure did miss her.

I'm not gonna make this a kiss and tell series about older women. It's not that I'm too much of a gentleman ...