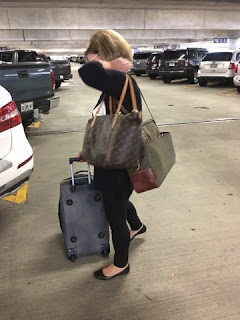 Debbie and I flew to New York yesterday for a biz/pleasure combo trip.

At the airport, Deb had a momentary melt down.

"Did you check your wallet?" I asked.

"I NEVER bring my wallet."

"Hello! Because it's too heavy."

As I watched her struggle with her three bags ... TWO of which are big purses ... I just had to ask ... "You mean heavier than those bags?"

"Never mind ... it's right here in my convenient slim carrier."

I am so glad she found it before the long explanation of the weight of the wallet vs the weight of the other bags ensued. Of course I was the one who asked the question ... and so we were off to the Big Apple! 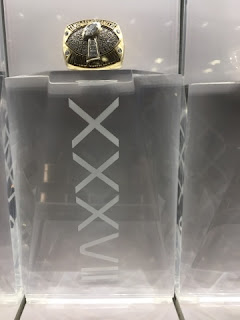 First stop was the NFL headquarters where my old buddy Tod Leiweke, COO of the NFL, hosted our New York USF Alumni for a cocktail reception.

We talked about our Unstoppable Campaign (which is breaking records and this month will exceed ONE BILLION DOLLARS in donations ... okay ... I had to brag). Tod was campaign co chair for a few years when he was in Tampa with the Lightning.

Oh ... and very cool ... we even saw the ring that commemorated the Tampa Bay Bucs Super Bowl XXXVI victory. 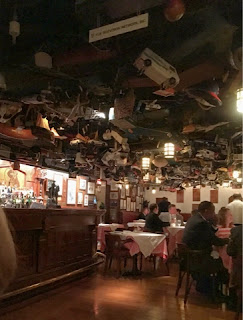 After that, we ate at The 21 Club just down the street.

Now the things that are unique about the 21 is you can't get in unless you are a member, there are hundreds of jockey statues outside and inside from racetracks around the world and celebrities put all kinds of stuff on the ceiling. Tod is a member so he got the reservations. Apparently everybody from Donald Trump to Alec Baldwin have favorite tables there (although the only semi wannabe celebrity that we saw was a woman who practiced her opera scales as she ate at the table next to us).

But we had lots of fun. 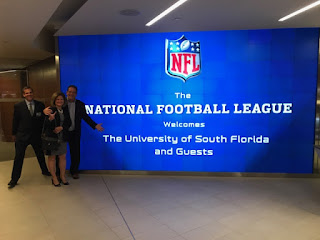 Thanks Tod. What a special night!

Tomorrow we head to Ground Zero, meet the architect who designed it and then see Hamilton for a mere $1,500,000.

You (and Tod) crossed a billion in that campaign?! Dude, that is USF as "unstoppable." The whole idea behind the name was that every time someone said USF couldn't do something ... And they said you'd never make a billion. Congratulations!