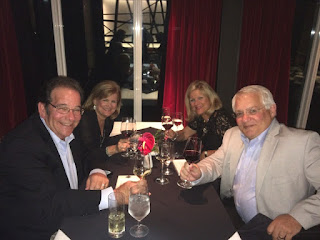 The service at the restaurants aboard the ship was just incredible  In fact the service on the ship in general was incredible. Everything you wanted was there and if it wasn't, the crew was truly happy to oblige.

The restaurants had fancy names like The Restaurant and Restaurant 2 (seriously). The menu at Restaurant 2 was preset and each item was described in detail ... followed by a half hour dissertation by the wait staff. You'd think foie gras was an entire meal by the description. Geez ... even geese probably are embarrassed by the amount of space it takes to describe their livers. And, of course each item was about the size of a quarter.

Okay enough about the liver ... 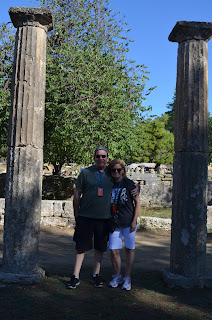 Our next stop was Olympia, home of the Olympics in ancient Greece which began in the 8th Century. .. located in Elis on the Peloponnese peninsula. There are a variety of buildings (all of which are sadly reduced to columns and pieces of stone). 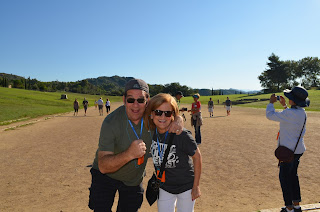 Included are: Temple of Hera, Temple of Zeus (remember him? Temple in every port), hippodrome (chariot racing like Ben Hur), Gymnasium (practice facility) and the Stadium (main stage) where Deb and I practiced the 100 meter dash (slowly) 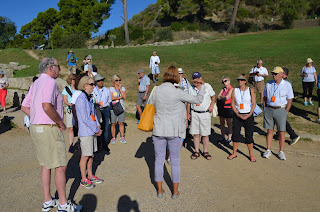 Our guide was knowledgeable but ... how you say? ... monotone. And she tried to fill every second with an interesting fact like how many olive trees there are in each city. I noticed as we went from guide to guide that the facts changed slightly. 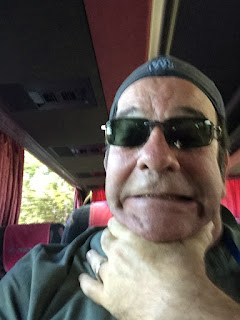 One said that the population in Athens was 5 million while another said 3,4 million and yet another said 3 million. We heard that the gods became devils in modern times and yet they also became modern saints.

I was ready to do the "Airplane" suicide on the
bus between stops, 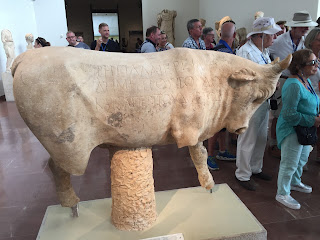 NOTE: Hey ... guess who we saw at the Olympic Museum? ROCKY!