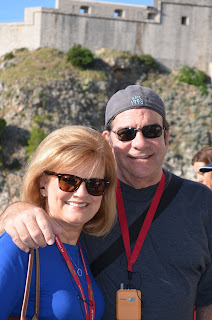 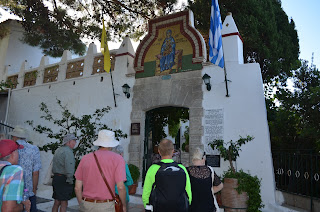 Man ... the time has flown by. We are almost finished our vacation and I am still only on Day 5 of my posts.

I'll try to give you just the highlights of the rest of the cruise for now.

Next post will be the remainder of our trip and time spent in Italy.

This is the Monastery Paleokastritsa in Corfu. Built in the 15th Century, the name translates into "Old Castle". That's about all I remembered ... well that and 38 busloads of other cruisers all trying to maneuver the narrow steep paths to the monastery, while competing tour guides gave information to their groups simultaneously.

(Don't you love how rich and detailed my descriptions of our travels are?) 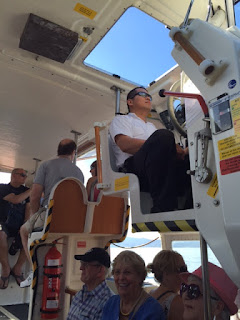 These are "Tenders", the vehicles that brought us to and fro the shore.

I posted this one because it was the cause of many discussions about "how the driver got up to his seat and why his seat was up there to begin with".

You can see why no one concentrated on significant facts like what caused the wars between Athens and Sparta ... or what were the great discoveries during the ancient times in medicine and physics.

However ... There were a lot of questions about nudity and the Olympic games (okay I asked if it was uncomfortable). 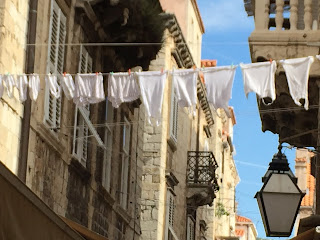 I think Dubrovnik was the most beautiful of the cities we visited in Croatia.

It's amazing to see where they are today when you consider the devastation and genocide that happened here just 15 years ago with the Serbian/Bosnian wars.

I snapped this shot as we ate at a local outdoor café. Life is now normal and the people are some of the kindest we have met (even though they have a series of wife-beaters hanging on the line). 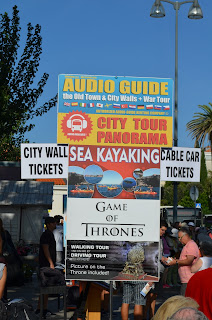 AND ... they are even filming Game of Thrones here for the fifth season. I don't know what that means because I don't watch it but I'm sure it's pretty cool. 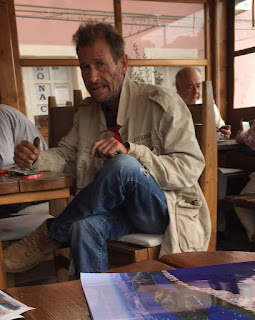 Our last port was in Croatia at a tiny village named Sali.

This is a guy sitting next to us at a coffee shop smoking Marlboros and drinking coffee and wine with his buddy.

His face tells the story.