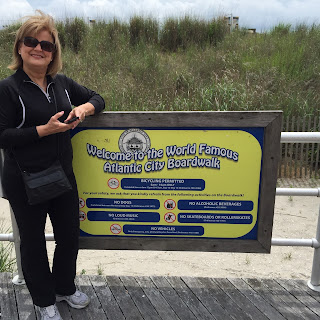 We flew on Spirit Airlines to Atlantic City on Friday for the holidays.

Have you ever flown Spirit? Don't bother ... you haven't missed anything. Spirit prides itself on having the cheapest fares. Maybe they do if you don't count the fact that you pay for checking your bag, more if you carry your bag, and you pay for coke, snacks, peanuts and even water.

The only thing you don't have to pay for is the song that one of the flight attendants sang for the flight instructions. I would have paid just to shut him up. (There was also a 15 minute ad that he did for Master Card during the landing. Arrrggghhh!) 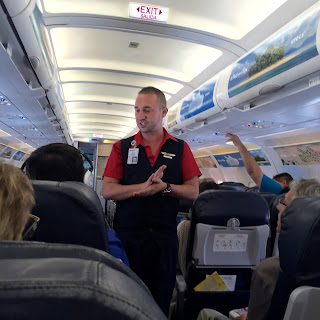 Oh well ... landed at the airport and went to Harrahs, where our room awaited. The casinos in AC are scattered in two sections of town. In our section of town, Harrahs was across the street from Golden Nugget and a block away from The Borgata ... the upscale casino hotel. Even though they are next to each other you still have to take a taxi across the interstate.

The room we got must have been constructed during a down year when all they had for materials were cardboard and glue. There was a kid next door that cried, talked and sang for 8 straight hours Friday night. I didn't witness that personally, because I was downstairs researching the gaming areas. But, Debbie got security, and called downstairs and presto! We had a new room the next day ... with REAL walls and everything. 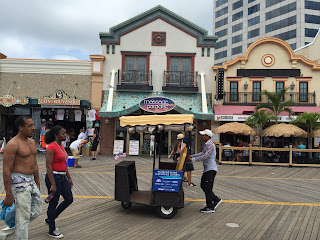 Saturday morning we had breakfast at the buffet and then took a cab to the famous Boardwalk. Debbie was so excited to show it to me. She had visited it with her family back in the day when she was a youngster. I think she told me that she rode a horse that dove off a platform or something like that. She also carefully explained how the Boardwalk got its name. "You see. these boards?" She asked me and pointed to the ground."These are what we walk on ... Board ... Walk!" 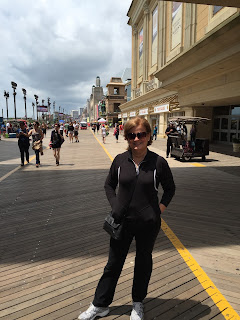 And the people who walked along with us were very interesting as well. Lots of tattoos, gold chains, medallions, sunglasses, wife beaters, slicked back hair (and that was just the women).

Most of the shops either sold Salt Water Taffy or advertised Full Body Massage. I'm not sure how they are related but Deb clearly had a preference for taffy and told me I did too. 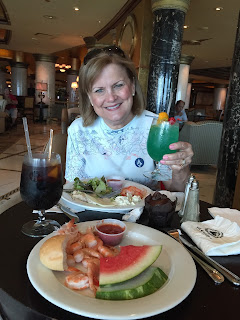 Caesars and Ballys were on the pier so I had to continue my quest for research in those two establishments as Debbie walked ahead to shop for bargains and lots of taffy. I had continued success and Debbie found "stuff".

Caesars was a very nice hotel and had one of the nicest Diamond Club Lounges that I ever have been to. The food and atmosphere rivaled anything in Vegas. Diamond by the way, represents your player level based on how much you gamble. Thank heavens, Debbie is such a prolific player. 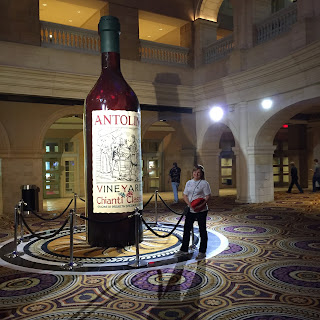 There was also a giant bottle of wine in the lobby of Caesars. I ultimately had to pry Debbie away from it.

Later that afternoon we went back to Harrahs, showered and took another taxi to The Borgata.

We ate at Wolfgang Puck's for dinner and the food was superb. Great place to people watch.

Stomaches full ... we hopped back into a cab and headed all the way back (a block away) to Harrahs. 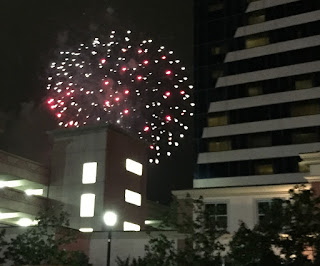 But lo and behold, the fireworks had begun for the fourth of July celebration and folks were stopped on the Interstate and walking in the middle of the street. I kid you not. Traffic was at a stand still.

We had a great trip ... flew back today and passed out on the couch. Happy Holidays all!