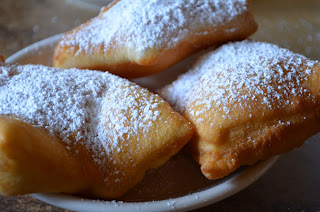 Question: What is pictured to the left?

Hint: This is one of the major food groups in New Orleans.

Answer: If you said beignets .. you are not a native. My people just call them donuts. Order this at Morning Call in Metairie and say ... "Order of donuts and coffee". That means café au lait and beignets. 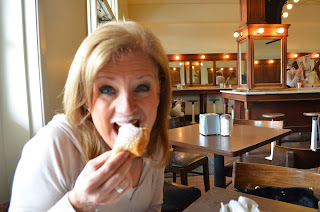 Is there anything in the world more delicious?

Deb and I started there this morning. It was a grey day with scattered showers and  not one you'd want to spend walking the streets of the French Quarter so we drove to my old haunts.

This is my favorite. Morning Call (as I've written about before in my blog: "How you know if someone grew up in New Orleans") is the best place to have coffee and donuts. It used to be down the street from Café Du Monde in the Quarter and all the locals ate there. It moved some years back to Metairie and still has the original furnishings and still is the best! 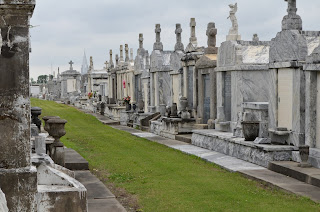 It was such a dreary day that I thought a tour of the cemeteries in Metairie would be appropriate. As you might know, bodies are buried above ground here. The city is built on a swamp ... bodies "move around a lot" if they are buried in the conventional way. So the cemeteries which look like stone cities are filled with crypts and mausoleums. There are famous ones in the Quarter, but my favorites are the ones that line Metairie Road. 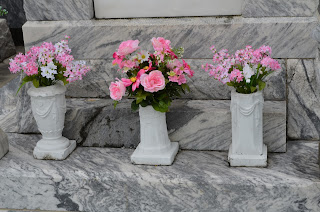 The stark contrast of the flowers placed by families in front of these massive stone structures is striking.

After our brief tour of the dead, we looked at the houses of the living (high living). 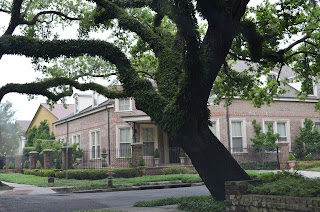 Old Metairie has incredible estates that rival those you would see on St. Charles Avenue. The massive oak trees frame these beautiful homes nestled in the older neighborhoods that the casual onlooker never really know about. (Wow ... I sound like a travel guide or a realtor or ... pretentious ... huh?)

Anyway, this was Debbie's tour and I knew that she would love the real estate insight. These homes didn't appear to have any lingering damage from Katrina. I always loved this neighborhood ... I knew some kids that lived here and they allowed me to visit if I promised not to make it a habit. Last time I showed you my old neighborhoods. Easy to see why I spent a lot of time visiting OTHER neighborhoods. 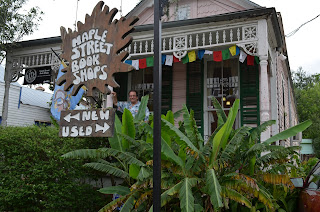 So ... for contrast ... we travelled uptown to visit my favorite and one of the last surviving neighborhood bookstores: Maple Street Book Shops. Located near the corner of Maple and Hillary, this place has charm, elegance, old air conditioners, the smell of a well worn bookstore ... even a roach or two. It actually resides in two houses. One has new books and one has old books. Bought the latest book, "Shoot the Moon" from Chris Wiltz (a high school buddy and terrific writer). 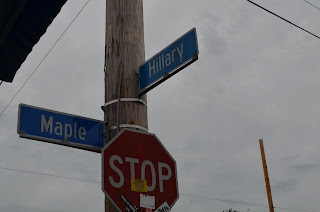 Maple and Hillary was also once the destination of our favorite hang outs. The Raven was our bar when I was ... drinking age (that meant I was tall enough to reach the bar in New Orleans). Everybody knew Percy the bartender.

Maple Hill was the restaurant across the street. After a night at the Raven, we'd discuss politics and the arts (translation: football and girls) and eat chicken fried steak sandwiches (or was that College Inn?)

Speaking of food, since we hadn't eaten in two hours, Deb and I decided to head over to ACME Oyster House. Still one of the best even though it's now a popular tourist destination and jacked its prices up by 200%. We sat at the oyster bar and ate po boys while the shuckers threw me an errant oyster or two.