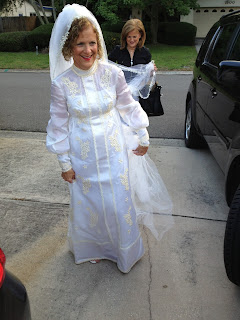 Tom and Dennie celebrated 40 years of marriage last night. It was kinda like a sequel to Tony n' Tina's Wedding hosted by long time friends Debbie and Wally.

Dennie arrived at the house wearing her original wedding dress trailed by twin sister Debbie holding the train (yes ... my Debbie) just like she did on her wedding day. I was impressed that Dennie wore the original dress she wore 40 years ago. (Anything that I wore 40 years ago won't go past my knees.)

The girlfriends squealed with delight (all night) and took tons of pictures.

We had dinner around a long table as friends toasted to their long relationship. 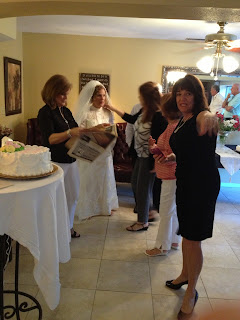 Debbie read a sweet speech she did in 5 minutes last night, Doug talked about marital bliss (he's been married twice ... this time for less than a year), Betty F___ Crocker (inside joke) gave the most inspirational speech thatmay have been in tongues, Phyllis knocked down the candles in the middle of my speech and Denise needed a translator to explain most of what was going on. Joe guessed most of the answers to the quiz Debbie put together like how many pets did they have over 40 years.

Aldo, as usual, created most of the humor of the night. He represented the New Jersey/New York contingent (a la Tony n' Tina). He and Joe and Richard talked most of the night about diesel engines and outboard motors. I didn't know there were so many different types. Joe and Aldo sounded like Mona Lisa Vito (from My Cousin Vinny).

Best quote of the night: Denise ate a big bite of wedding cake and said "Mmmmm this is almost as good as Dennie's crack." (Explanation: Dennie makes a delicious dessert that the girls call "crack" because you keep eating more.)

Denise had no idea why the whole room started laughing.

Funny night. Here's what I toasted: 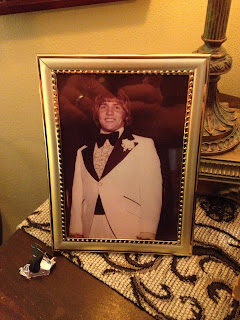 40 years ago today ...
Tom and Dennie vowed to stay
His hair was black now it's grey
Dennie hair was black one day
… blonde and red and curly too ...
every year another do.
The wedding price was very low
Over 40 years ago
If they were getting hitched today
Tom would still still not want to pay.
Dennie's a good Catholic girl
Church on Sunday's in her world
Tom is busy every day
Lawyers don't have time to pray.
Dennie never is alone
Unless she loses her cell phone.
Three kids later we agree
It's a special family
Courtney was the first to marry
Four kids aren't a lot to carry.
Colby's got his hands full too
Ella tells him what to do.
Kyle is next to tie the knot
He's the planner … I forgot
40 years you're just beginning
40 more you'll keep on winning!