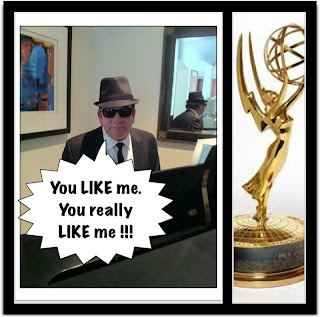 Got a text Saturday night December 1st ... from my buddy and fellow song writer Mike: "We just won da EMMY!"

We did? We really did? I couldn't believe it .... so I looked it up. Sure enough under category 14: Children/Youth, we tied with Floxy and Julio Episode 1 from Puerto Rico (an obvious winner in San Juan, I imagine).

Okay, it was the Suncoast Emmys, the regional show, not the national show (although I had my Sally Field speech ready to go ... wait ... that was the Oscars ... oh well I wasn't there anyway.)


Our nomination was "Chicken Named Mac" with Michael Sexton, me and Kevin Riley. Mike really wrote this song. It is such a great tune and is filled with super lyrics. It's all about nutrition and stars a fat chicken who "eats all the garbage that they throw at him" until he learns to "exercise and eats right ... SWEET".

Kevin is the animator (and one of the most talented guys you ever want to meet).  Oh ... I can't forget the AMAZING engineer: our friend George Harris (Because he wont let me forget. He saw his name was missing). The four of us produced three of these interstitials ... you can find the other two at www.bodytoonups.com or just click below:

"Chicken Named Mac" was shown on the 2012 Children's Miracle Network Telethon for All Children's Hospital and was nominated this summer. All have a messages for kids and are a little reminiscent of School House Rock (okay ... we stole their schtick).

Take a listen. Pretend you are about 6 and they sound even better!
at December 09, 2012