Let Us Give Thanks 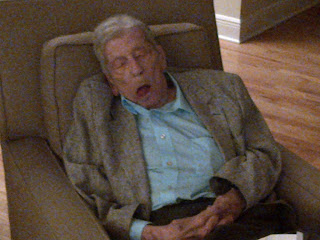 Sammy was downstairs at Menorah Manor waiting for me to pick him up just like we discussed ... he was only three hours too early.

"Dad ... I've been trying to call you. The nurses told me that you have been sitting in the lobby since 2 o'clock. Where's your phone?"

He pulled it out of his pocket. "Here. I never got a call."

"It says that you have four missed calls."

After a few tries, Sammy sat in the front seat of my car and settled in. He had important questions on the way over like ... "Do you ever dream, Joel?" and  "Did you put all this stuff in the car (the dashboard) or did it come with that?"

Debbie met us at the door. "Sammy ... I hope you're hungry. We've got some great food for you."

"I'm not particular. I'll eat whatever you have."

"I don't like any of that ... lettuce and tomato and thousand Island dressing would be fine ... and what kind of bread do you have?"

Sammy stretched out in the easy chair and after a few bites of mashed potato and bread snored peacefully looking like the mask from Scream.

Unfortunately ... His pants didn't take the step with him.

"Whoops Joel. Grab my pants would you?"

Aaaah ... Let us all give thanks (that he DID remember his underwear).