Has Anyone Seen the Queen? 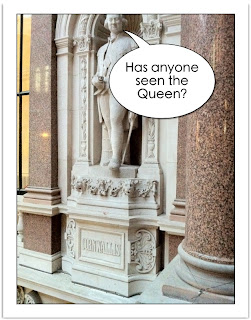 That's the question my middle daughter Alissa kept asking strangers on the street when we took her and her brother, Josh to England about 7 years ago. She had this horrible fake British accent ... and was also a little trashed after sipping on champagne New Year's Eve.

That's the last time Debbie and I were in London ... until yesterday.

We are here and having a ball ... no kids ... just us ... and most of the administrative team at USF. It's part work and part holiday.

Last night was mostly work (if you call it that) ... we had a special VIP reception at the British Foreign Office. Cool place ... That's where I took this shot of Cornwallis overlooking the huge lobby area. 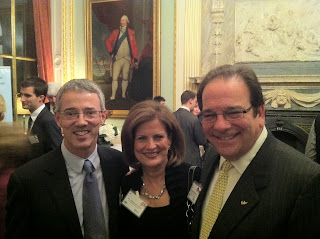 We had dinner with one of our famous alums, David Mearns. David is the most prolific shipwreck explorer in the world. He had great stories of finding lost ships... more than 25 of them to date. The Australian government awarded him a special honor for uncovering a ship that was sunk more than 50 years ago in a vicious battle in which hundreds lost their lives.

The families of the victims were thrilled to finally have closure.

We asked him what he was working on now. "Two projects that are top secret," he said. "I could tell you ... but I would have to kill you." 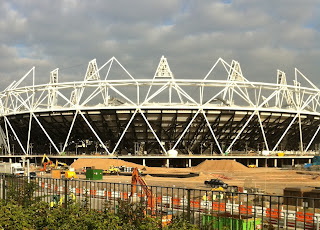 This morning, we had our very own special tour of the Olympic Village (opening in 9 months). Thanks to our great friends at Nielsen Research, who are Olympic sponsors, we were treated a great behind-the-scenes look.

Heavy security at the sight ... so much so that we all had background checks done weeks earlier, had check points along the way and were questioned as we got onto the bus.

At first, Debbie was not allowed in because of her criminal record (she accidentally poked a lady in the eye when she was an usher at Bayfront Center 30 years ago). They allowed her in when I told them that we would watch her closely.

This place is awesome. 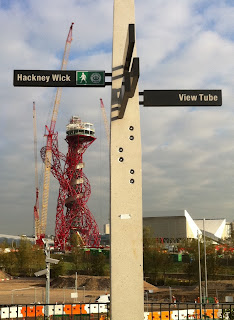 The first thing you see is the brand new 80,000 seat stadium that will be be used for events and ceremonies. The tour guide said that when the games are done ... it will become a summer house for Elton John or something.

There's a great sculpture that looks like an abstract version of  the last scene of the Planet of the Apes when the Statue of Liberty's hand emerged from the sand. It's at the corner of Hackney Wick and View Tube ... you know ... I really don't remember what the heck that thing was used for.

There's also a fantastic Aquatics Stadium. The roof looks like a big Dorito. I think that might be why they are the swimming sponsors. It seats 17,500 and houses two 50m pools and a diving pool.

I did hear that the construction workers (all 20,000 of them) use it now for some pretty wild pool parties. 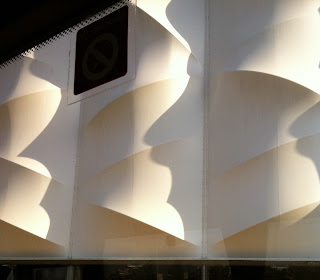 Basketball has it's own stadium and it's wrapped in a special canvas created by Dow Chemicals. I think it allows the players to stay inbounds alot and when the ball does bounce out ... it comes right back. They built the stadium too close to the Athlete's Village, we were told ( I kid you not!)... so they had to use special soundproofing on the apartment walls. Apparently, the basketball games create lots of noise and the night time celebrations get pretty rowdy.

By the way, I heard the sponsor for Basketball is Lou's Tattoo Parlor.

So many cool venues for the Olympics: The Velodrome ... Cycling track ... is awesome. The IBC/MPC Broadcast Center is massive ... 20,000 of the world's media.

After our tour ... we visited another of the World's Wonders ... Harrod's. 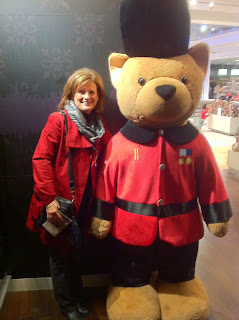 If you've never been ... you have to go to this "department store on steroids". We could have spent a week just touring this unbelievable place.

Clothing, jewelry, everything imaginable for men, for women ... and lots of Kidstuff.

There were designer tennies, designer mini purses, designer baby bottles ... designer jewelry for toddlers. Seriously, there was everything you could possibly think of.

Debbie met one of the staff members off the elevator (the Egyptian Elevator, by the way, built of gold). He tried to hit on her but Debbie told hem that she was married and to leave her alone. He hooked up with a stuffed squirrel on the 5th Floor. 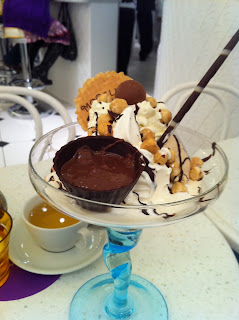 We went all out and ate at the Gelato Bar. We split a special treat that I had to take a picture. Not only was it delicious ... it was the cheapest thing on the menu. I think it cost about $52. (I might have slightly exaggerated that).

You might remember a prior blog entry that I wrote about the SIZE of her hand bags. She decided she needed a BIGGER one.

I was a good sport and walked through (I am not kidding) 4 different floors of purses. I have never seen so many ... furry ones, leopard ones, little shiny ones with jewels ... It was a good two hours of purse shopping and we came out ... EMPTY.

"Just browsing. I need time to have a ... RELATIONSHIP with a purse." 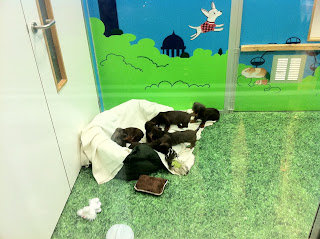 Well, just as we were about done "browsing" we came across something I have never seen in a department store: A pet shop.

There were puppies and hamsters and gerbils and fish ... very cute.

Deb's favorite were the miniature wiener dogs. Gotta admit they were my favorites too.

They had their designer section as well. Clothing, jewelry, treats (with their own butcher shop). 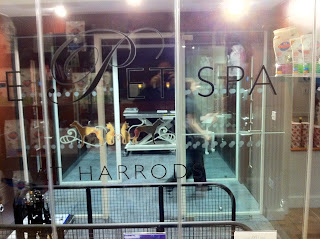 And if that wasn't over the top enough ... we stumbled upon the most decadent of all: