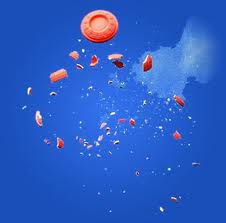 Randy and Linda Simmons have done six of these annual fundraisers for USF Athletics and it truly is ... a BLAST (The shotgun type ... that is). My first one was three years ago and I was immediately hooked. When Randy handed me my a 12 gauge shotgun I told him that Jews don't hunt ... or shoot. I had no idea what to do with it. He was kind and patient with me, teaching me the ways of the shotgun and how to blow little orange disks to smithereens.

My teammate this year, Allen Crumbley, is no stranger to guns. He brought a few to the event (can't remember what kind they were but I think Allen called them Betsy,  Big Ben, Blaster and Scarethecrapouttaya). He also gave me a vest to wear over my Bulls Blast shirt.

"You gotta wear this Joel," he said."You can carry your shells in these pockets and I've even used the back pockets to put a few dead birds in." Hmmm ... guess Allen doesn't like when birds get in front of the targets.

It was a treat shooting with him. He played for Bear Bryant a few hundred years ago and looks like he can still do damage on the field. You know how confident he is when he calls PULL before he even puts his gun on his shoulder ***

*** translation for non shooters: PULL is the command you use to release the clay discs in the air. Most normal people are in their shooting stance when they say this. I get confused and usually shoot both barrels 5 minutes before I yell the signal.

A few hits that I thought I made because it looked like I hit a piece of the target were scored as misses. Allen said, "Nope ... you just shot your load. It looked like you got a piece but you really didn't." ***

*** translation: Some of you might be thinking of other interpretations of the piece you got and the load you shot. I ... of course ... am simply talking about buckshot and clay pigeons.


One of the great things about this event is that it really doesn't matter how good or bad you are ... everyone has fun and feels great at the end of the day. Unless you accidentally kill someone or you get injured. 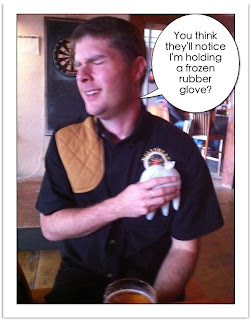 Our only injury of the day was the Foundation CFO. He wasn't shot ... the kick action of the gun bruised his shoulder  ... and his ego (a little).