There's a six year age difference between Nikki and her sister Alissa.

When Alissa's birth was imminent, we thought it was a good idea to get "professional sibling training".
We figured Nikki would instinctively know what to do with her sister .. like pull her hair, "borrow" her clothes, throw her under the bus (she was very literal) ... but it probably wouldn't hurt for her to hear the happier side of sibling rivalry as well.

So we enrolled her in the Bayfront Medical sibling program.

The classroom setup was a family affair. The future brothers and sisters were assembled on the floor of a small circular auditorium and the parents were seated above. It was kind of like watching a mini version of Spartacus ... there were even a few tiny gladiator fights that broke out spontaneously. Nikki ... to her credit ... sat attentively and even counselled some of the smaller children on the proper etiquette of sibling classroom behavior. She was about 3 years older than most of them.

Then the moment arrived when the "babies" were handed out to the restless crowd for hands-on training in diaper changing, burping, etc. The "babies" were, of course, life sized dolls that came in different sizes and colors. The dolls were handed out one at a time. Nikki was toward the back of the pack and was handed the last doll of the batch.

It was a black doll.

Nikki stood for a while with the doll in one hand ... the other hand on her hip (I knew what that stance meant and held my breath). She arched her eyebrows, looked at the nurse and at the doll a few times and then looked up at us. I motioned to her emphatically to sit down and listen to instructions.

Nikki walked up to the nurse and pulled slightly on her sleeve. The doll was dangling in her hand. The nurse stopped in midsentence and my heart dropped to the floor. 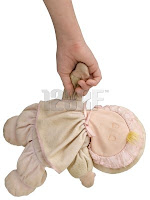 Cute! Just what I needed today :) Keep up the great writing!