Who's Watching the Kids? 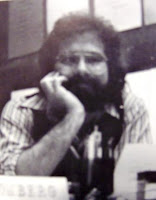 Looking back at my old Canterbury pictures, my hair was pretty long. Actually ... looking back ... I'm happy I HAD hair.

I wasn't alone. Alot of my fellow teachers had long hair: Sarah, Jan, Candy (well, my hair was longer than hers). Even some of the guys. There were always more female teachers than male teachers in the lower school. Karl was the rare exception as a kindergarten teacher. But then Karl was a rare exception in life.

Sarah Lonquist taught first grade. She has a southern accent right out of "Steel Magnolias". In fact, she could have starred in that movie. The students adored her ... so did the rest of us. Her name had 37 syllables: Sayyyyrraaahhhlooowwwiiinquiiiiissssst. Sarah's own kids had 37 syllables in each of their names, as well, and were always referred to as Carollonquist and Jimmylonquist ... as in ... "Well, I just had the nicest day shopping with my Carollonquist ... she just has such wonderful taste ... must take after her mother." or "That Jimmylonquist is just the brightest thing ... he takes after his mother." She looks the same today as she did 35 years ago and is still as energetic as ever.

Pat Murphy was the fourth grade teacher. She had cheerleader good looks and in fact was the cheerleader coach for years. She used to think I was hysterically funny ... but that only lasted a week. I'll save that story for later.

Kenny Beytin was the science teacher and football coach. He and I became great friends. Kenny was a grad of Princeton and played football for them. He was drafted by the Dallas Cowboys but messed up his shoulder. When he came to Canterbury, he started the football program and had a winning season the first year. The team lost every game after that. I think that was because there was no team after that ... Kenny left after the first year to get his law degree at Stetson. He's a successful Tampa attorney practicing today.

Jan Fisher was the librarian. She was married to Greg Fisher. Candy, Jan, Greg and I used to hang out together when Candy and I dated. Things didn't work out for any of us ... Candy and I split up and Jan and Greg split up. I dated Pat Murphy for a week (remember her?). Candy started dating Art (the brother of the Head of the Upper School Paul) ... which didn't work out, so Art wound up dating (and eventually marrying ) Jan. Whew!

And what happened to Candy?

Well ... she is married to a woman in California. They adopted a little boy. I think they named him Joel Arthur.
at November 22, 2009