There I was in the middle of the train station in Rome. I had no luggage ... which meant no clothes and no classroom materials ... and was told by the "officials" that it could take weeks before they found my bags. I was due to start teaching classes in less than a week.

The more upset I got with the customs officers ... the more laid back and nonchalant they became.

Fortunately, I had not lost my traveler's cheques ... which I carried in my pocket. For those of you too young to remember ... travelers' cheques were critical travelling currency ...  as there were no ATMs in those days. American Express backed these if they were lost or stolen. Mine were neither, thank heaven.

I needed clothes so ...  I asked a taxi driver to take me to a nice clothing store. He took me to one located right off of the Via Veneto (at the time one of the most famous streets in the world ... filled with a unique blend of outdoor cafes and frequented by celebrities). I wasted no time picking out a few pair of pants and shirts ... not taking time to try them on, of course, because men don't do that ... only to find out later that everything ran MUCH smaller and tighter in Italy ... as my crotch can attest to.

That's also where I met Antonio. 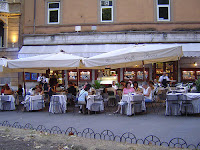 Antonio was shopping in the same store and spoke a little broken English. He interceded for me when I struggled to get directions for hotels in the areas. He told me he could help me find a place and invited me to sit with him at a cafe and have a cup of coffee (which came out more like "sit in a coffee cup and drink one of the tables"). Anyway ... Antonio's family owned a pension (small residential hotel) just a few blocks from the Via Veneto. It was perfect. I moved in that afternoon.

Antonio became my one and only friend in Rome. He knew lots of people ... the right people ... and tried to help me find my luggage and get people to listen to me. I went to the "Dogana" every morning to see if there had been any progress ... Antonio would tag along from time to time and yell a few obcenities to get folks moving ... but nothing seemed to work. Every evening, we would watch American gangster movies dubbed into Italian on TV with his family and then walk down to the Via Veneto where we would drink and party all night long. I couldn't work (I delayed the course until I could get my classroom materials and equipment) so I figured I would be like the Italians and just let life "happen".

You know ... looking back ... I should have wondered how Antonio was making ends meet as I never saw him go to work during the day. But he was certainly popular with people ... especially with the ladies ... consequently, I was too. They would stop and talk to me when we were together and ... I have to say, I was feeling like quite the ladies' man myself with all these beautiful women.